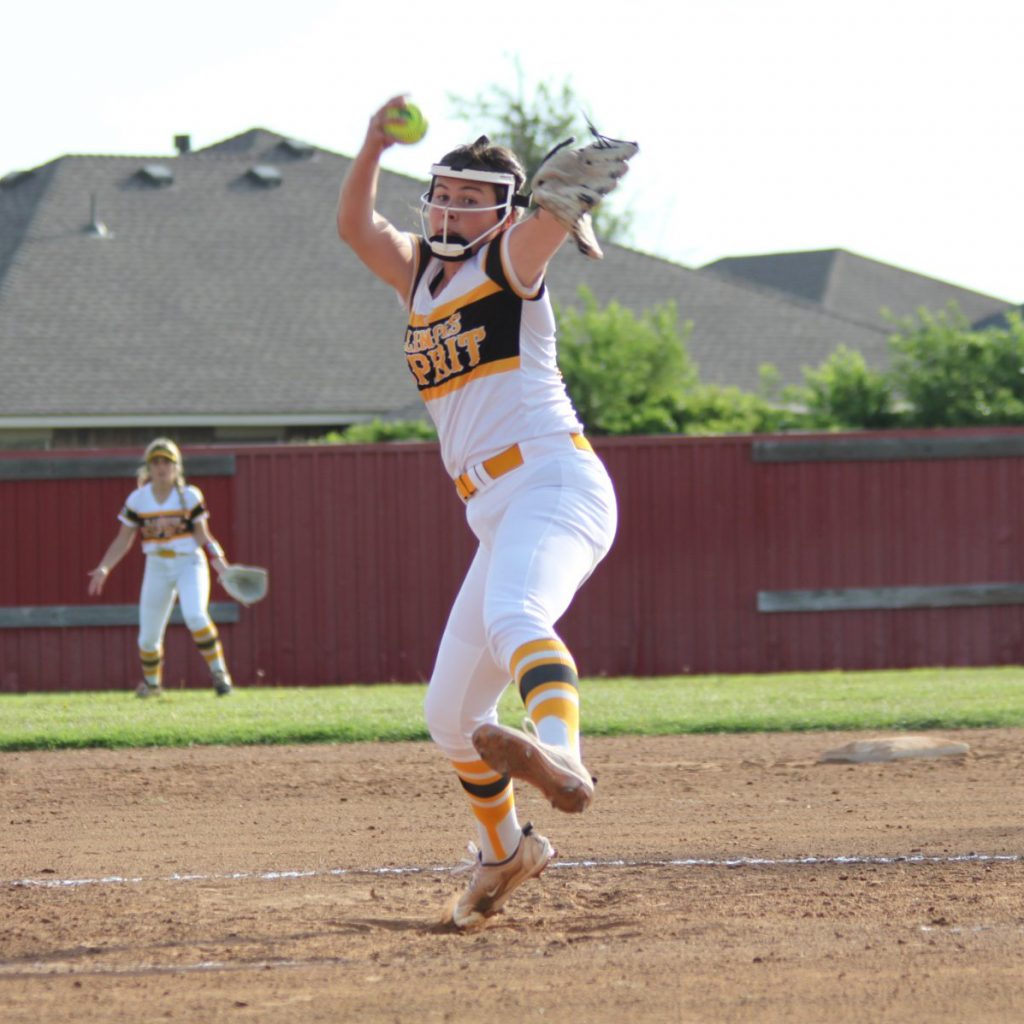 Hannah Gibson of Carlinville, pitching during a ‘Road to the Show’ softball tournament in Oklahoma City, was one of five Macoupin County girls that competed June 4-6. Gibson suited up for the Illinois Espirit 16U along with high school teammates Makenah Dugan and Olivia Kunz. The Espirit won three of five games. Photo contributed.

Summer may be a time for relaxation in the eyes of many students, but there are certain individuals on the road staying active and taking their game to the next level on a much larger stage.

Earlier this month, five local players competed at ‘Road to the Show’ all-star tournaments in Oklahoma City, where they additionally got to attend a few games at the National College Athletic Association Division I Women’s College World Series.

Hallie Gibson, an incoming CHS freshman, took to the field with the Storm 08 along with Addi Cox of Gillespie.

The Illinois Espirit finished with a winning 3-2 record in five games June 4-6.

The bats immediately found their groove in the tournament opener against the Lady Crimson 16U. In a shortened three-inning contest, the Espirit ran away with a 13-5 win. Dugan, Gibson and Kunz each contributed an RBI. Gibson additionally earned the win on the mound.

In the second game of the June 4 doubleheader, the Espirit nearly battled back after falling behind 4-0 in the first two frames but came one run short and took a 4-3 loss against the Gametime Stars 16u Gold.

On June 5, the Espirit was cooking in all aspects as it swept a June 5 twin bill. The girls outscored their opponents by a lopsided 16-3 margin, beating Impact Gold Supernor 16U 9-2 and picking apart the Nebraska Quakes of Harrington, 7-1. Dugan plated a pair of runs on two hits against Supernor, which immediately saw a 2-0 first inning lead vanish after the Espirit triggered a 9-0 run with a four-run counterpunch in the bottom of that same inning. A similar attack awaited in game two when the Espirit took total control with six first inning runs against Harrington.

The Espirit concluded its slate of games with a 4-2 loss to the OK Compton Bombers June 6. Gibson dealt two frames on the bump, allowing two runs on three hits in defeat.

The Espirit is currently 4-5 overall after dropping three of four contests at a tournament in Champaign last weekend (June 11-12).

The Storm 08 came out firing until it was halted by the Illusions Gold National 14U team in the fourth game of the weekend.

The Storm shut down the ETx Lady Tomahawks 6-0 and Colorado Stingers 9-2 June 4, then blew out Colorado Hype-Franco 9-1 on the front end of a June 6 split.

Hallie Gibson and Cox each turned in scoreless outings on the mound June 4 while the offense put at least one run on the board in each of the six total innings that were played throughout the two games. Hallie Gibson closed out the opener after issuing a free pass and a hit in relief. Cox made the start in game two and threw two perfect frames while picking up a pair of strikeouts and the win.

Cox repeated the same performance with two scoreless innings that put away Hype-Franco June 6. By the time she was called to duty in the bottom of the third, plenty of support had already been provided. The Storm led at that point, 7-1. Hallie Gibson went 1-for-2 with a hit and an RBI.