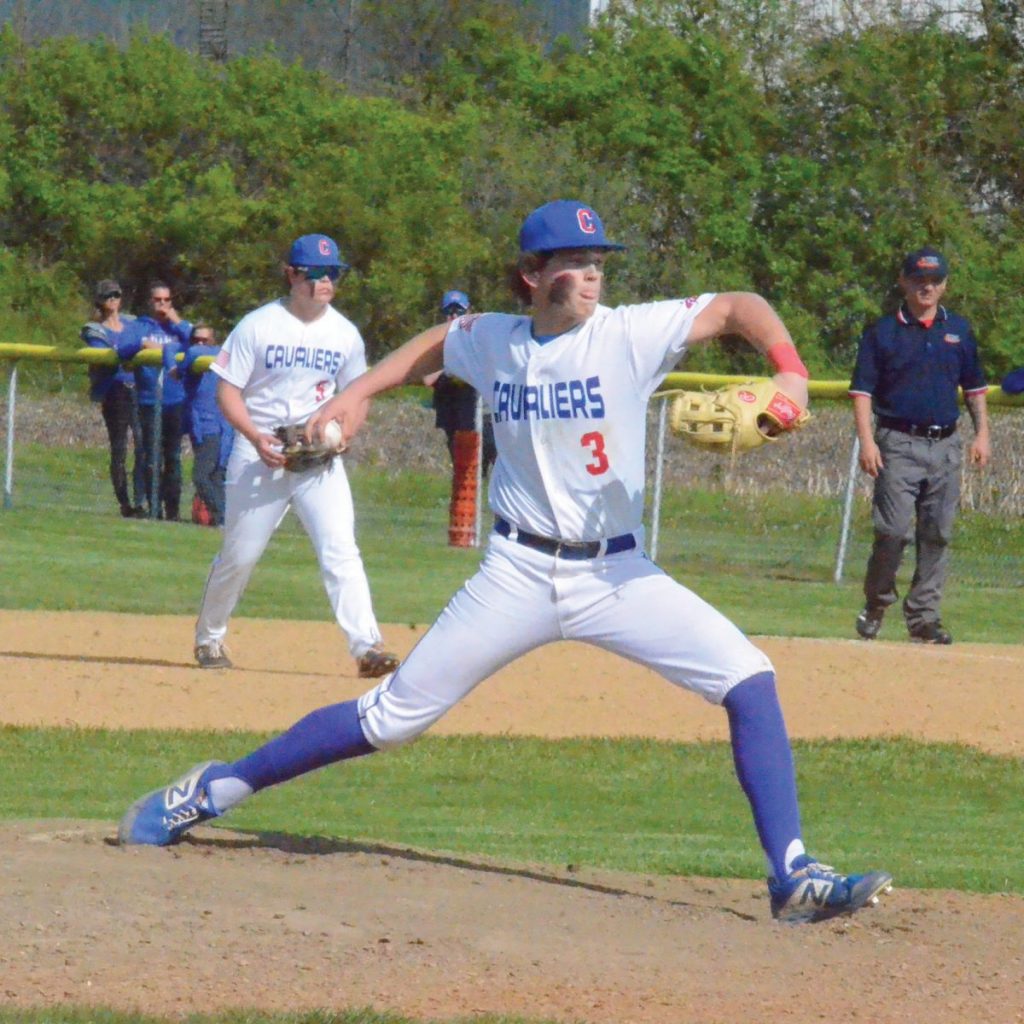 Ryenn Hart pitched seven innings for the Carlinville High School baseball team against Vandalia May 9. The junior allowed two earned runs (six total) on six hits and struck out three in a ‘no decision.’ The Cavaliers lost the game in extra innings, 8-7. Enquirer~Democrat photo by Jackson Wilson.

The Staunton High School baseball team put 12 unanswered tallies on the board in the middle innings and survived a late scare to beat Southwestern at home, 12-10, May 9.

The Bulldogs handed the South Central Conference-leading Birds their first loss in league play and moved to 3-3.

Southwestern, which entered Monday on a six-game winning streak, dropped to 17-9. The Birds are 5-1 in the SCC.

Southwestern built up a 4-0 lead in the top of the first but that advantage did not last long.

Staunton tied the game with four runs of its own in the bottom of the second.

The Bulldogs used a six-run third and two-run fourth to break the game wide open but a resilient flock of Birds chipped away with two runs in the fifth and were able to rattle off four in the final inning before Staunton finally closed the door.

Brady Gillen went 2-for-3 and plated a team-leading three runs for the victorious Bulldogs. Adam Overby, Matthew Sievers and Dillion Pritchett backed Gillen with one hit and two RBI apiece. Prichett’s hit was a home run.

Collin LeMarr also went deep and had a game-high four RBI on two hits for Southwestern, but struggled on the mound and took the loss after surrendering ten runs on five hits and five walks in just two-and-one-third frames of work.

Luke Meyer and Caden Silvester handled the Staunton pitching duties. Meyer made the start and allowed four runs on five hits while issuing three free passes and striking out two. Though he was rusty down the stretch in relief, Silvester was able to lock up the save and give Meyer the win despite allowing six runs to cross the plate in the final four innings. Silvester walked six, gave up six hits and fanned eight Birds.

Carlinville coughed up five leads and blew two saves en route to another heartbreaking conference defeat, this time at Vandalia, May 9.

The Cavaliers went up 2-0 in the top of the first. The Vandals responded with a pair of runs in the bottom half.

Both teams traded one run in the second.

Carlinville pulled back ahead by two in the top of the third and kept that advantage alive until Vandalia rallied for the tie in the sixth.

The game then went into extra innings, where the Cavaliers had a pair of opportunities to put away the Vandals with a one-run lead. Vandalia forced the ninth and then pushed across a pair in the bottom of that inning against Ayden Tiburzi to walk off with its fourth conference win of the year, 8-7.

For the most part, CHS starter Ryenn Hart was doing enough to keep the Vandalia offense in check. He only surrendered one walk and limited the Vandals to six hits while setting down three batters on strikes. Unfortunately, the seven-inning effort amounted in a ‘no decision’ because the Cavaliers couldn’t provide their ace with enough defensive support. Of the six runs that crossed the plate for the Vandals in regulation, only two of them were earned.

Carlinville, which committed six errors in the loss, sunk to 8-7 overall and 1-5 in the SCC.

The Cavaliers beat East Alton-Wood River 11-0 at home May 4, but they have still been caught up in the middle of a rough stretch as of late even with that result included. Carlinville has lost five of its last seven games entering the final week of the regular season.

Riley Flowers, Cole Hatalla, Andrew Baines and Logan Hammann all drove in runs for the Panthers.

North Mac pushed across a pair of runs in both the fifth and sixth to take control after trailing 4-3.

Greenfield-Northwestern gets back on track against Roxana

Greenfield-Northwestern rapped out 14 hits and beat Roxana at home, 10-6, May 9.

The Tigers avoided a third consecutive loss and kept an overall positive season going at a consistent pace.

Greenfield, currently the second place team in the Western Illinois Valley Conference to Brown County (21-2 overall; 9-1 WIVC) is 19-5 on the year.