The county board room was full on Tuesday night for the May board meeting with county employees from multiple departments present to hear the results of several resolutions regarding employee wages.

The meeting began with a moment of silence for Lyndel Klausing, one of the board members for district one in the Staunton area. He submitted his official letter of resignation on April 14 due to be effective on May 9. Sadly, L. Klausing passed away on the evening of May 9. His daughter Holly was nominated by the Macoupin County Republican Party to fill the position, but was unable to attend the May 10 meeting. She was officially appointed to the position by the board’s unanimous vote and will be sworn in at an upcoming board meeting.

Next the board discussed reducing the salary of elected first term officials. A decision on salary is made every four years, meaning the decision of the board now might not be the same or affect the decision they would make in 2026 when the issue is brought up again. The salary reduction would not affect the mandated salaries of the State’s Attorney or Sheriff, but would affect other elected positions such as the County Clerk, Circuit Clerk, County Treasurer, and Coroner. Currently the County Clerk, Circuit Clerk, and County Treasurer make $71,716, the board debated dropping the salary for a first elected term official by either $10,000 or by 10 percent. Stayton voted against the 10 percent decrease in salary for first term officials, meaning a starting salary of $60,000, all other board members approved the reduction.

A $10,000 stipend for County Clerk Pete Duncan was approved by the board as Duncan has taken on additional duties for the board, including becoming the CFO and the board secretary.

Anne Clough was recently appointed by the courts as the new Public Defender in Macoupin County. She and Judge Deihl were present at the meeting so Clough could be approved for the State Salary Reimbursement program. This would mean the state of Illinois would reimburse the county two-thirds of Clough’s salary. The board approved the request.

Deihl also spoke to the board, along with the Director of the Probation Program in Macoupin County Corrine Briscoe regarding probation officer salary adjustments. Probation Officers provide risk assessments on those who are arrested to determine the likelihood of a person re-offending. The State of Illinois is set to take over the risk assessment programs, and employ risk assessors of its own. This has created a problem for Macoupin County and several other rural counties because the starting wage offered by the state is much higher than the wage paid by the county. According to a memo from Deihl, four of the eight risk assessors currently employed by the county have applied or will apply for the state positions and two assessors are set to retire in 2023, potentially leaving the county with only two risk assessors.

To combat the potential loss of three-fourths of the county’s staff over the next year, Illinois has offered to pay the disparity rate between the wages in Macoupin County, who begins around $34,000, and the State wages, which start at $45,003 and increase based on experience, and all include state benefits. The county would be responsible for paying the current salary rate and for increased IMRF contributions and FICA increases, which was estimated by Duncan to be $14,651.90 from the county, and likely even less. The state would reimburse the county for any other differences in salary. Deihl was under the impression that the union would agree to no other raises in Fiscal year 2023 and that Brsicoe would recommend to them a salary cap at $76,500.

Both Deihl and Briscoe encouraged the board members to approve the State-provided solution to prevent an exodus from the county probation office and difficulty hiring in the future. Some board members were apprehensive over the issue, as they were concerned about salaries, if the State decided to discontinue the risk assessment program the county would unlikely be able to pay the same amount and any employees would potentially lose the additional money provided by the state.

Despite discussion between Deihl, Briscoe and the board members, during which the two explained the problem and solutions and answered a variety of questions. When it was time to vote on the issue seven of the 17 board members voted to accept the payment deal offered by the state, 10 voted against the measure, and the measure failed due to lack of majority support. 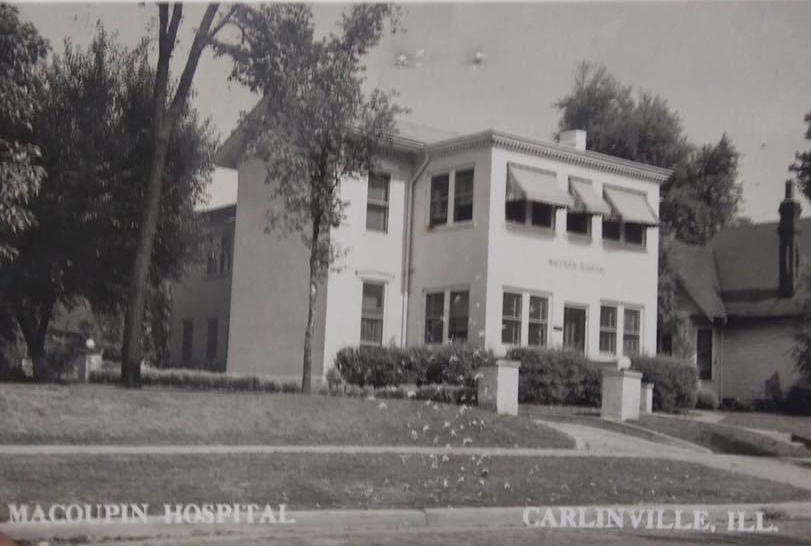 The County Board will soon begin seeking bids for the abatemant and demolition of the Macoupin Hospital located on East Main Street in Carlinville. A postcard shows the building as it looked when still in operation, date unknown. Photo courtesy of the Macoupin County Historical Society Facebook Page.

Board Member Harry Starr discussed the demolition of the former Macoupin County Hospital on East Main Street in Carlinville. According to Starr the building is in disrepair and renovating it would make no sense. The board would like to demolish the building but it must first be abated due to the presence of asbestos. The abatement was estimated to cost between $10,000 and 20,000. The request to seek bids was granted and the board will begin seeking bids for the abatement and demolition of the building in the near future.

The board approved the request to begin seeking bids for the Courthouse HVAC system upgrades and other HVAC needs. Starr requested that the motion be amended to also seek plans and specs of the building from a consulting engineer so any HVAC companies would be able to see the scope of the project. The request, as well as Starr’s addition, were approved by the board.

The county was made aware that the Great Rivers and Routes Tourism Committee was prepared to offer them a grant for the Old County Jail Tourism projects, such as paving the parking lot next to the jail and for work or restoration to the jail building. The grant comes with two stipulations, the first is that bids must be in by June 30, the second is that the work be completed by Aug. 31. Starr asked the board to approve seeking bids for the Old Jail projects to get work started to meet the stated deadlines.

A resolution was passed amending the animal control budget and transferring $12,000 from the county administrative line item to the animal control line item. The board has continued to make these transfers due to the insufficient funds to keep the animal shelter operating. Both Board Members Dunnagan and Matthew Acord voted against the resolution.

Ross requested the board pass a resolution allowing the Circuit Clerk’s office to use the established E-Citation funds to pay two annual bills which amount to approximately $12,000.

The board approved Ross’ request.

American Rescue Plan Funding was discussed but no decisions regarding distribution were made. With all of the requests, from only the County offices and officials submitted, Duncan estimates that if they were all approved, $7,500,000 of the $8,700,000 million awarded to the county would be used. Discussion was had regarding giving funds to the townships as well, but no decision was made. Board members decided to wait to discuss money for the townships until the funds for the county offices were distributed.

The board voted to accept the preliminary engineering agreement with WHKS for the replacement of the Hagaman Road Bridge. The county would pay for the engineering work but according to County Engineer Tom Reinhart, 80 percent of the construction costs would be funded by the Federal Government and the remaining 20 percent would be locally funded.
The board approved a culvert replacement in Barr township for $4,000.