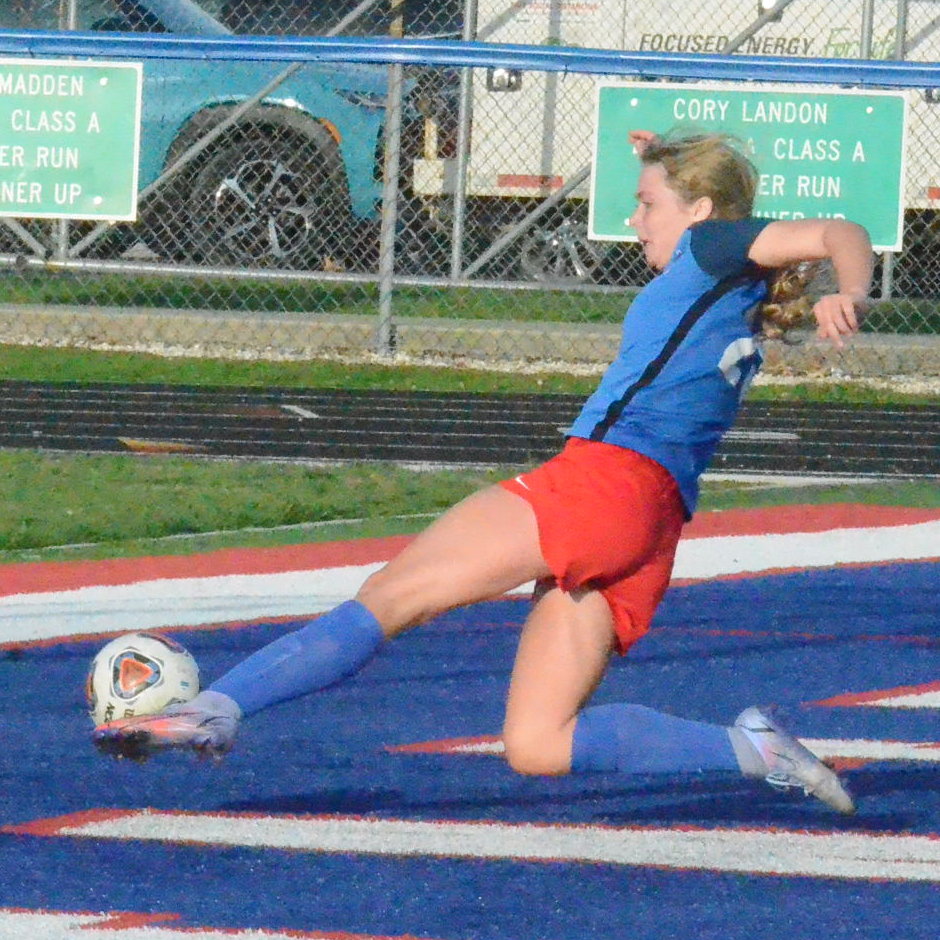 Sports’ fans and players are already aware of how difficult it can be to score a hat trick. Now, imagine accomplishing that feat as a soccer player dealing with shin splints.

Carlinville’s Marlee Whitler did that during a 7-1 Senior Night victory over Staunton Apr. 27.

After Lana Vanderpoel and Annabelle Hulin both found the back of the net in the first half, Whitler took over and helped the Cavaliers pull away down the stretch.

Jessica Strubbe made it 3-0 immediately following the intermission and ignited Whitler on an assist that was generated off of a cross pass at the 15:10 mark.

Danielle Russell put Staunton on the board less than a minute later, but Whitler was ready with a quick answer when she beat goaltender Breanna Feeley to the far post after the ball had taken a friendly richochet on a fast break. Whitler, then all alone, went into a sliding kick for the score.
Whitler sealed the hat trick on a shot that was tipped in off of a defender and Jordyn Loveless rounded out the offensive array on a super rare play in which she threw the ball into the net on an in-bound pass with just over seven minutes remaining.

Carlinville picked up another SCC win (4-3 at Litchfield) Apr. 29 but couldn’t repeat the same fate at Greenville May 2. A 3-0 loss to the Comets brought the Cavaliers’ record to 8-8-1 overall. CHS remains above .500 in conference play at 4-3.

Staunton has lost four consecutive conference matches, with the offense only producing a single goal to the opposition’s 17. The Bulldogs are 8-9-1 on the season and 2-5 in the SCC.

McWard only needed a single half to get a hat trick, which proved to be more than enough support for goaltender Melanie Gist.

Gist made 14 saves and earned her third shutout of the season. All three have come during North Mac’s winning streak, which has been extended to five games.

Southwestern hit a bump in the road after beating Staunton 3-0 Apr. 26.

The Piasa Birds let a 1-0 halftime advantage slip away and lost 2-1 at Hillsboro Apr. 28, which locked them in a first place tie with the Hiltoppers. Both teams are 6-1 in the SCC.

Mac Day, along with Ali Wilson and Morgan Durham, found the back of the net versus the Bulldogs. She also scored Southwestern’s lone goal against the Hiltoppers.

Southwestern fell short in a 1-0 nailbiter against Maryville Christian in non-conference action at home May 2 and endured back-to-back losses for the first time since Mar. 22-24.