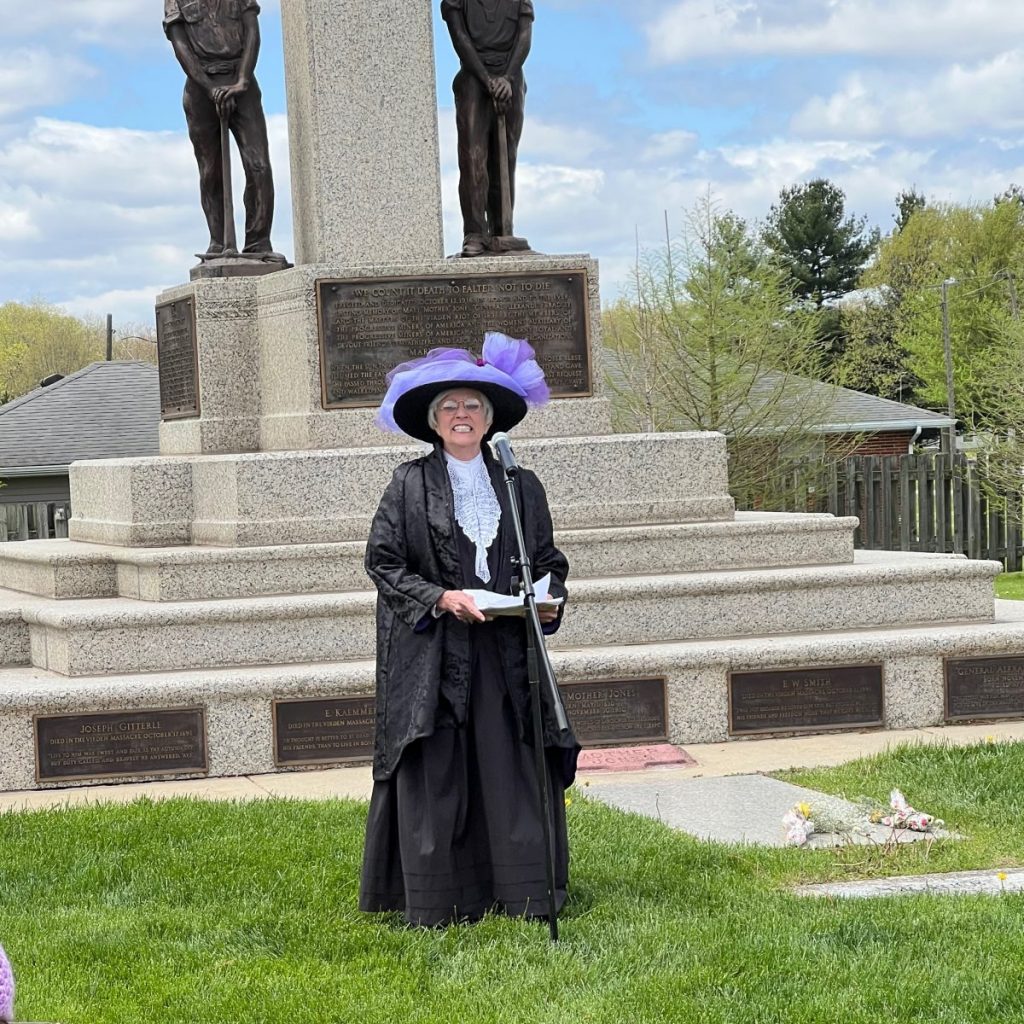 Buried with ‘her boys’

Mary Harris Jones, Mother Jones as she is often referred to, is a well-known figure in the history of labor and unionization. She is responsible for leading charges against several companies throughout the late 19th and early 20th century, fighting for workers and their rights, especially for coal miners.

Scholarship on Jones focuses largely on her accomplishments within the labor movement and as an activist. Mt. Olive celebrated the first International Mother Jones Day Festival on May 1, her adopted birthday. The event began at her burial place in the Union Miners Cemetery, where the focus was not just on her life as an activist but her life before she became Mother Jones.

Mary Harris was born in Cork, Ireland. Her birth date is not exact, but baptismal records indicate she was baptized on Aug. 7, 1837. Her family immigrated to Canada when Harris was 5 and she later moved to America.

In 1861, she was married to George Jones, an iron moulder and member of the iron moulder union. The couple had four children named Katherine, Elizabeth, Terrence, and Mary. The family was living in Memphis, TN in 1867 when a yellow fever epidemic hit the city.

Within a week, her husband and all four of Jones’ children were dead. Their bodies were collected and thrown into mass graves, along with others, who had died from the disease. No stone, plaque or marker identified any of the dead, they were separated only by the day they died. Jones, in mourning, wore black for the rest of her life.

Her family, especially her children, have been written off in history, seldom mentioned by historians. Jones herself, in her autobiography, mentions only her husband by name.

The first International festival to celebrate Jones saw historians, a variety of union workers, friends and family of union workers, and the friends and families of those who had been hurt or killed in or by the working conditions of mines. While Jones was celebrated, the main event of the program at her memorial was the dedication of a bench bearing the names of her husband and children, placed near her burial site.

The memorial bench was the brain child of Nelson Grman, a resident of Mt. Olive, and member of the Union Miners Cemetery Association. It was made possible due to donations and grant funding from the State of Illinois. Donations came from almost every State and from Ireland to restore the Mother Jones Monument. There were so many donations that the Cemetery Association received the full grant amount of $78,000 and completely matched those funds allowing for many other projects besides the monument restoration, including a pavilion and front gate replacement.

The program featured several union members and leaders such as Gordon Hayman, Business Agent IATSE local 493 and Amy Rueff with the Illinois AFL-CIO. Music during the program was provided by Wildflower Conspiracy, with songs such as The Springhill Disaster and Children of Mother Jones. Nick Krumwiede also performed a song he wrote called The Battle of Virden.

After the dedication the festival continued in downtown Mt. Olive for May Day celebrations. The Mother Jones Museum was open from 2-3 p.m. for visitors, sidewalk games for children to enjoy were played, and visiting historians and writers gave presentations on an array of topics including labor battles and rebellions and life amongst the coalfields.