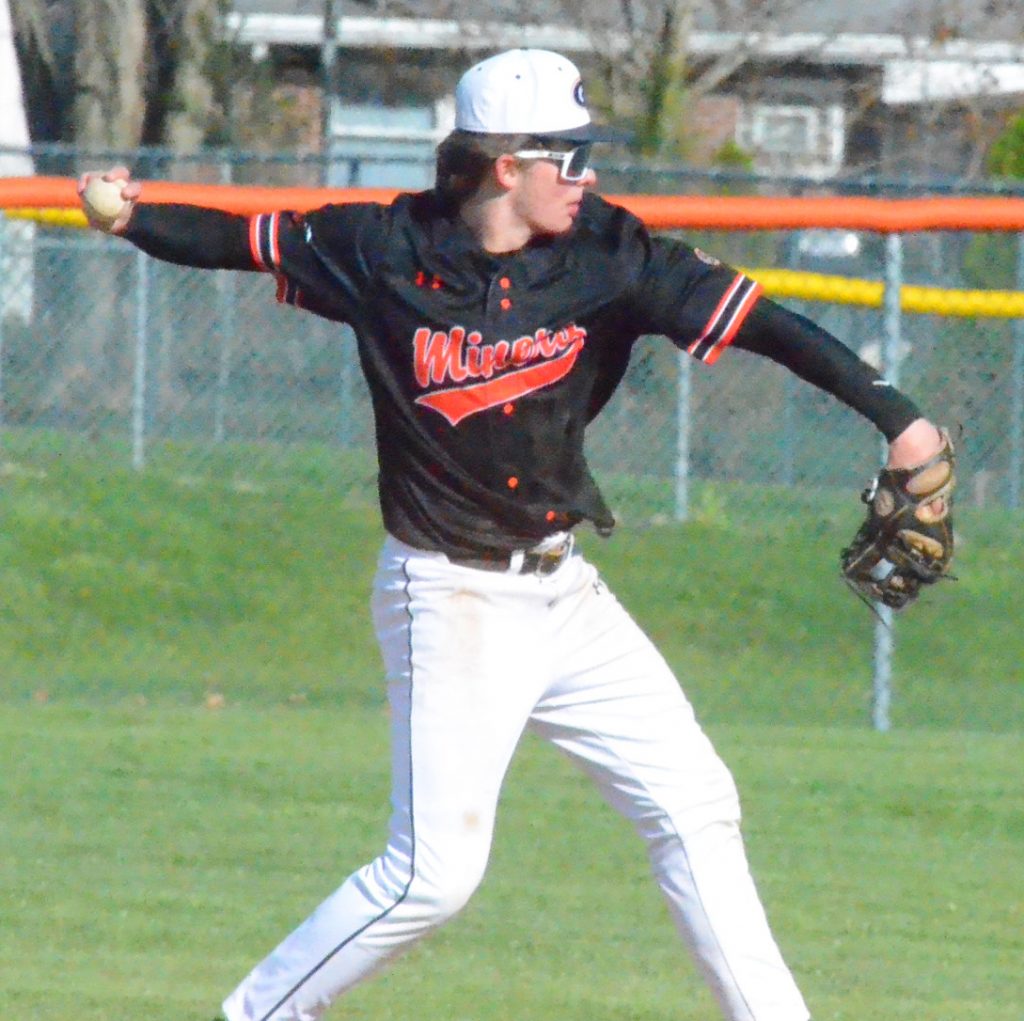 Bryce Buhs was the winning pitcher for the Gillespie High School baseball team Apr. 22 against Carlinville. Buhs allowed two runs on seven hits while issuing a walk and striking out five. The Miners defeated the Cavaliers, 3-2, in conference play. Enquirer~Democrat photo by Jackson Wilson.

The Carlinville High School baseball team traditionally likes to congregate on the pitcher’s mound to have its post-game discussion, both at home and on the road.
The Gillespie Miners didn’t take that too well following a 3-2 conference victory in Gillespie Apr. 22.

The heat of the Route 4 rivalry cranked up a notch as the teams had to be separated following some explicit verbal exchanges and a few shoves. The coaches acted fast and got the situation under control. Gillespie ran out to celebrate in left field, Carlinville moved its meeting to first base and everyone went about their usual business after that.

Despite getting outhit 11-5 and committing three errors, the Miners improved to 10-4 overall and 3-2 in the South Central Conference after weathering a late storm.
In defeat, the Cavaliers descended to 1-2 in SCC contests. Carlinville blasted Litchfield 12-2 in non-conference action Apr. 25 to bring its season record to 7-3.

Carson Wiser plated the first run of the game in the top of the opening frame, giving Ryenn Hart an early lead to work with.

Hart had the Miners on lockdown through four innings, but ran into trouble in the fifth. After he had walked in the tying run with the bases loaded, he surrendered a go-ahead two-run double to Bryan Jubelt that put Gillespie up for good.

Zach Reels cut the lead in half with an RBI single in the top of the sixth against Bryce Buhs, the starting pitcher for Gillespie who allowed two runs on seven hits while issuing a walk and striking out five.

Colton Bultema came on in relief and got the save, but Carlinville did not make the job easy for him. The Cavaliers loaded the bases in the top of the seventh before the Miners’ closer induced a game-ending groundout to third base.

Southwestern scored seven runs in the top of the sixth inning to beat Hillsboro, which led 4-0 heading into the fifth Apr. 22.

The late outburst propelled the Birds to an 8-4 conference win on the road and kept them atop the conference standings.

LeMarr turned in five innings on the bump and was taken off the losing hook after giving up four runs on two walks and three hits.

Cale Schuchman came on in relief and retired all six batters he faced to earn the win. 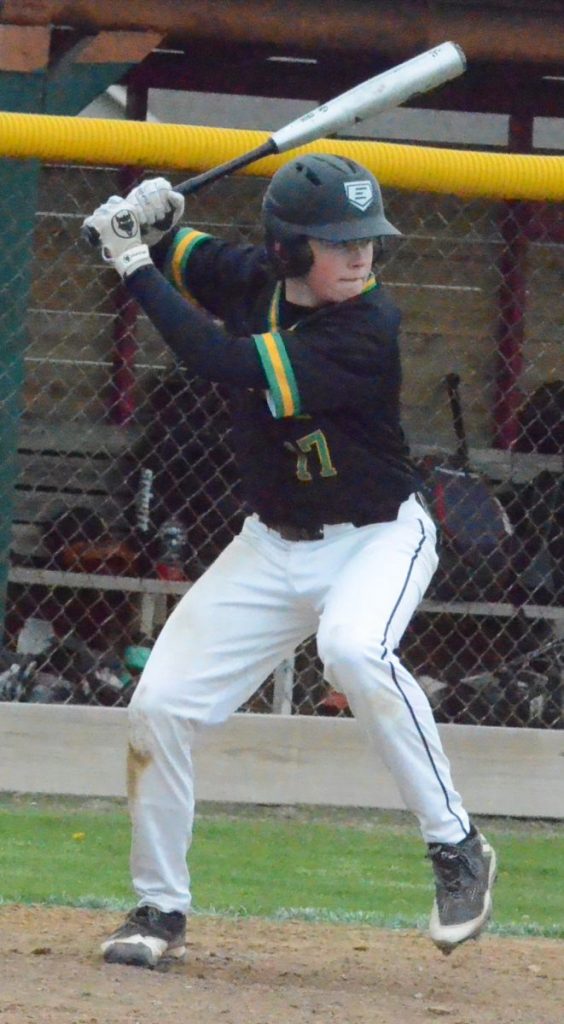 Southwestern’s Colin LeMarr, pictured batting at Carlinville Apr. 15, was one of seven Piasa Birds to contribute an RBI as part of a conference comeback win at Hillsboro Apr. 22. Southwestern trailed 4-0 heading into the fifth and walked away victorious, 8-4. Enquirer~Democrat photo by Jackson Wilson.

The junior fanned nine Comets while allowing just one run on five hits.

Matthew Sievers had two hits and an RBI for the Bulldogs. Dillon Pritchett went one-for-three with two RBI.

The Panthers were defeated at Auburn by a final of 7-2 in Sangamo Conference play.

The Trojans roughed up Kaden Brown with all seven of their runs on seven hits in the first three frames.