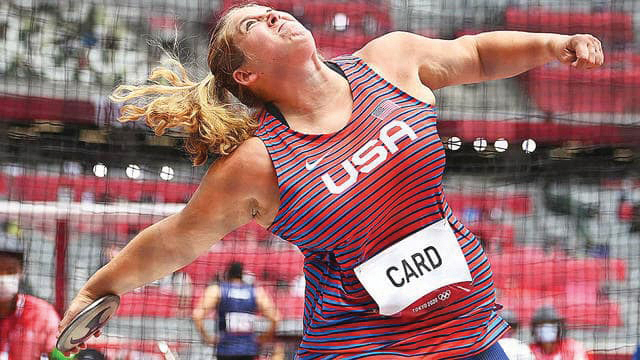 Carlinville native Kelsey Card, who recently announced her athletic retirement, was a two-time Olympian for the United States’ discus team. She placed 25th at Rio in 2016 and 28th at the 2020 games in Tokyo, which were moved back a year to the summer of 2021 due to COVID. Photo contributed.

Carlinville native Kelsey Card put forth two decades of commitment as a thrower.

That chapter is now concluded.

At age 29, the two-time United States’ Olympian has announced her retirement.

After devoting some personal private time to reflect on future plans and meet with her coach, Card came to an honest conclusion that her love and passion for the sport was ultimately fading away.

“I only wanted to continue if I still felt like I could do this 100 percent,” Card said during an on-phone interview. “I’m not okay with only doing something like that, for instance, halfway. This just felt like the right time. I was ready to move on.”

Card was emotional on several occasions thinking about such a choice, but an overwhelming amount of support helped lift her spirits. She didn’t have any regrets.

“Everyone has been so warm in receiving this news since it went public,” Card said. “My family, close friends and fans really made me feel awesome and even more confident in my decision.”

Card, who resides in Madison (WI) with her husband Andrew Bartsch, will now be pursuing an expansion of a private practice that she started three years ago as a licensed therapist after obtaining a Master’s degree in Marriage and Family Therapy from the University of Wisconsin, where she became an All-American plus a Big Ten Conference and National College Athletic Association Division I champion in 2016.

Although she is located four-and-a-half hours away, Card said that Carlinville will forever be home and that she is grateful for all the community has done for her.

Six years ago, Card was honored by former mayor DeAnna Demuzio at the Lions’ Carnival when she was featured on the cover of a Wheaties’ cereal box.

Last December, Card was recognized during halftime of a basketball game at Carlinville High School. She received a plaque commemorating her high school athletic accolades as well as a collage to be featured in one of the CHS trophy cases.

“Everyone that was a part of that went above and beyond to make it super special,” Card said. “I always love coming back to Carlinville. I really enjoy getting to represent my town. Even though I’m not technically an athlete anymore, I hope to continue to do that community proud. It’s given so much to me and it defines who I am.” 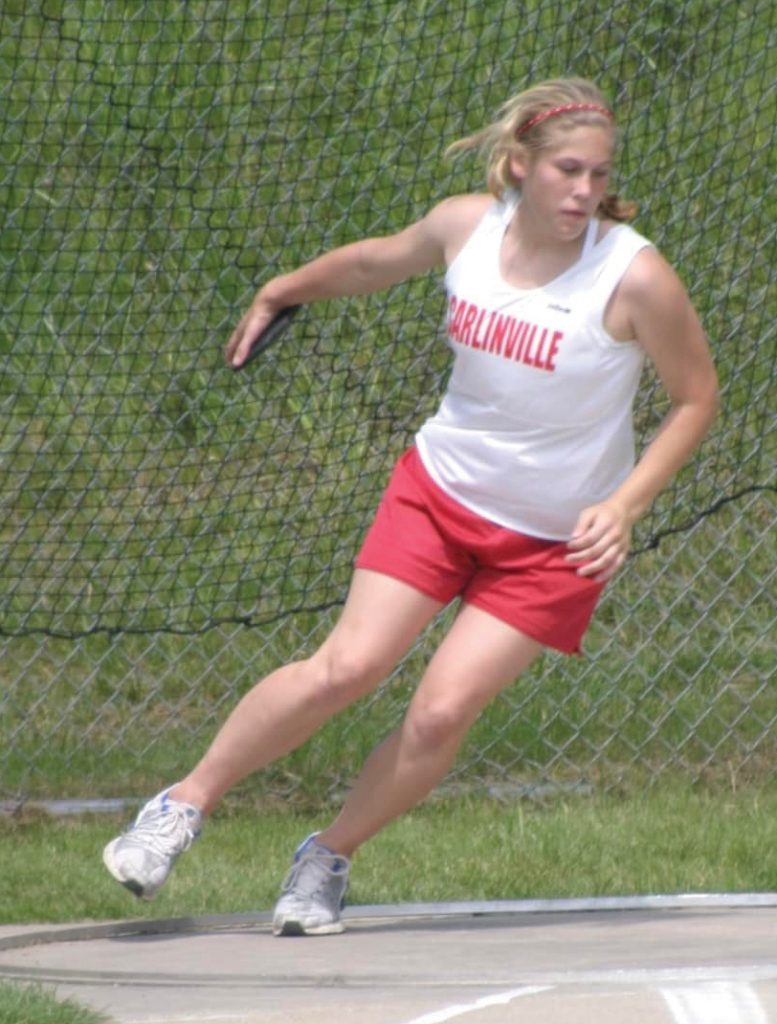 Kelsey Card broke the all-time IHSA discus record and earned eight state championship medals during her tenure at Carlinville High School, where she was additionally a standout athlete in both basketball and volleyball. Card claimed four titles in both the shot put and discus. After graduating, Card went on to become an NCAA Division I track & field national champion at the University of Wisconsin. Photo contributed.

As a Carlinville Cavalier, Card won eight track & field championships in shot put and discus (four in each category) while additionally being a standout athlete in both volleyball and basketball. On top of breaking the all-time Illinois High School Association discus record as a junior, Card helped lead the CHS girls’ basketball team to the Elite Eight and volleyball squad to a third place finish at state while playing under the leadership of three coaching greats in Ken Garrison, Darrin DeNeve and Fran Struble.