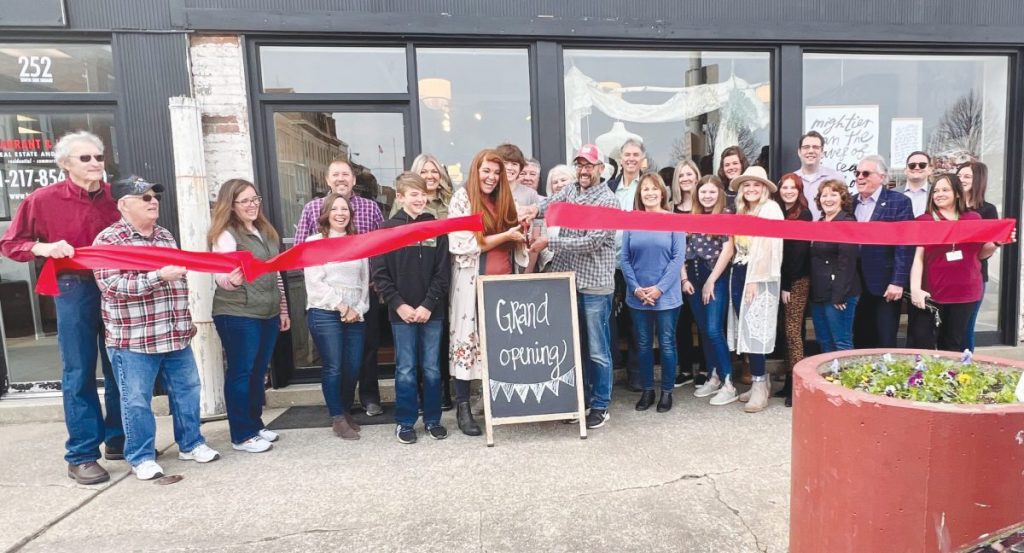 “We have more than one thing for everyone.”

Brave Hazel and the House of Olde held its grand opening on Friday April 15. Brave Hazel is owned and operated by Laura and Jon Convery and has been a family business since its inception.

Started five years ago at the Convery’s home, Brave Hazel soon expanded from a spare bedroom in the house to a traveling store in the back of a refinished horse trailer. The family moved into a new house, where the back of the home was quickly reworked to house the boutique. The store soon moved from a traveling boutique and in-home store to sharing a space with Hawthorn Tree Coffeehouse on the Carlinville Square.

In December, Roger Suhling and Tami Smith, the owners of Olde on the Square, announced they would be retiring and closing the store. The community speculated but no answers about the future of Olde were forthcoming until mid-January when Suhling and Smith announced that they had sold their establishment to the Convery’s.

Olde on the Square closed and Brave Hazel moved from Hawthorn Tree back to its home boutique location. Renovations to the building were ongoing throughout the winter and early spring. The Convery’s say they always dreamed of having their own location due to size restrictions in their home making it difficult to work.

Building renovations brought the whole family together as members from both L. Convery’s, and J. Convery’s sides of the family helped redesign the old building for the new owners. Both of their boys have been involved in the business as well with L. Convery saying, “Even though it started out as women’s clothing, it’s still a family business.”

Brave Hazel combined its products with items that were previously sold at Olde, creating a new, blended identity as Brave Hazel and the House of Olde. Instead of only clothing and accessories, shoppers now have home decor items to choose from as well. L. Convery said, “we’ve always wanted to do home decor too… It kind of felt like just a dream come true.”

The store features an eclectic range of products with a focus on women’s clothing. Men, children, and animals should not feel left out though as there are plenty of items to chose from for them as well. All of the clothing sections were expanded with the additional space as well as the elements of home decor that were brought in.

There aren’t plans for any further expansion as the couple explained they wanted to be in one place and be available for their customers and to be able to do one place right. They might still load up their trailer occasionally but only if they feel it is the right decision to make.

“We plan to put all our heart and energy in here.” J. Convery said.

He later added, “We want you to walk in and feel like you got an entire experience. It’s not really about selling you goods, it’s about the experience and how you feel when you’re in here.”