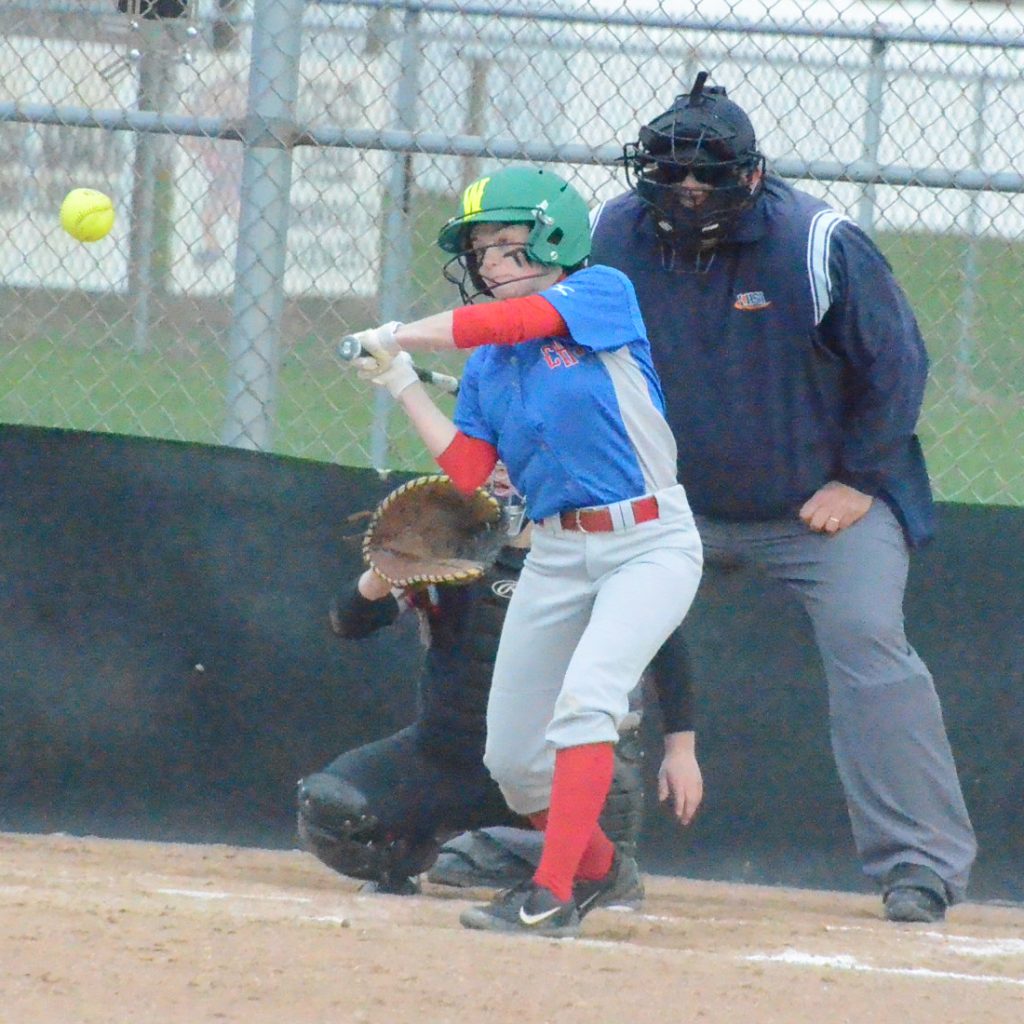 Carlinville High School softball senior Morgan Broaddus went two-for-two with a single, a double and an RBI while drawing a pair of walks and scoring two runs during a 6-2 win over Pleasant Hill at Loveless Park Apr. 15. This was the back end of a doubleheader sweep for the Cavaliers, who had already defeated Southwestern in a conference showdown earlier that day. Enquirer~Democrat photo by Jackson Wilson.

One of Paige Vinyard’s greatest gifts just keeps on giving. Her gritty Carlinville High School softball team is now on an eight-game winning streak.
On Apr. 12, the Cavaliers traveled to Litchfield and piled up 16 runs while Catie Sims twirled a two-hit shutout in South Central Conference action.
The weather may have been rather chilly and windy at Loveless Park Apr. 15, but that didn’t slow anybody down.
Carlinville dominated a doubleheader, blitzing Southwestern 10-4 for another conference win and following that up with a 6-2 triumph against Pleasant Hill.

The Cavaliers trailed the Birds 2-0 at the start, but ripped off five runs in the bottom of the third and four more in the fourth to seize total control against a rival that had beaten them handily in Piasa a year ago. The amazing freshmen trio of Isabella Tiburzi, Hannah Gibson and Braley Wiser produced seven of Carlinville’s 11 hits and plated seven runs. Gibson additionally turned in a complete game on the mound, allowing four runs on seven hits while striking out three and walking four. The defense went the entire game without a committing an error.

Carlinville overcame another 2-0 third inning deficit against Pleasant Hill. The Cavaliers flipped the script in the middle innings (two in the third; one in the fourth) and added three more insurance tallies in the bottom of the sixth. This time, the experienced Morgan Broaddus was the offensive initiator, going two-for-two with a single, a double and an RBI while drawing a pair of walks and scoring two runs. Wiser led the Cavies with two RBI. Tiburzi and Gibson also plated one run apiece. Kendal Maddox tossed five frames on the rubber, allowing two runs on six hits. Sims issued a walk and two hits in two innings.

Behind four scoreless innings of relief, three hits plus a home run and two RBI from Savannah Billings, Staunton defeated Pana, 6-3, in its SCC opener Apr. 12.

The Bulldogs, which fell behind by one after going up 2-0 in the first two frames, snapped a 3-3 tie with two runs in the fourth and piled on another in the fifth.

Billings was one of four Staunton players to put on a multi-hit performance along with Taylor Nolan (three hits), Lilly Bandy (two hits) and Ele Feldmann (two hits).

North Mac couldn’t get anything started in a 13-2 loss to Williamsville Apr. 12, but otherwise battled throughout the next three contests.

The Panthers walked off Lincolnwood in eight frames, 8-7, Apr. 15, then split an Apr. 16 doubleheader with Pleasant Plains and Pleasant Hill.

North Mac, 6-6 overall and 2-2 in the Sangamo, defeated Pleasant Plains 6-4 and found itself on the other side of an eighth-inning walkoff against Pleasant Hill, losiing 7-4.