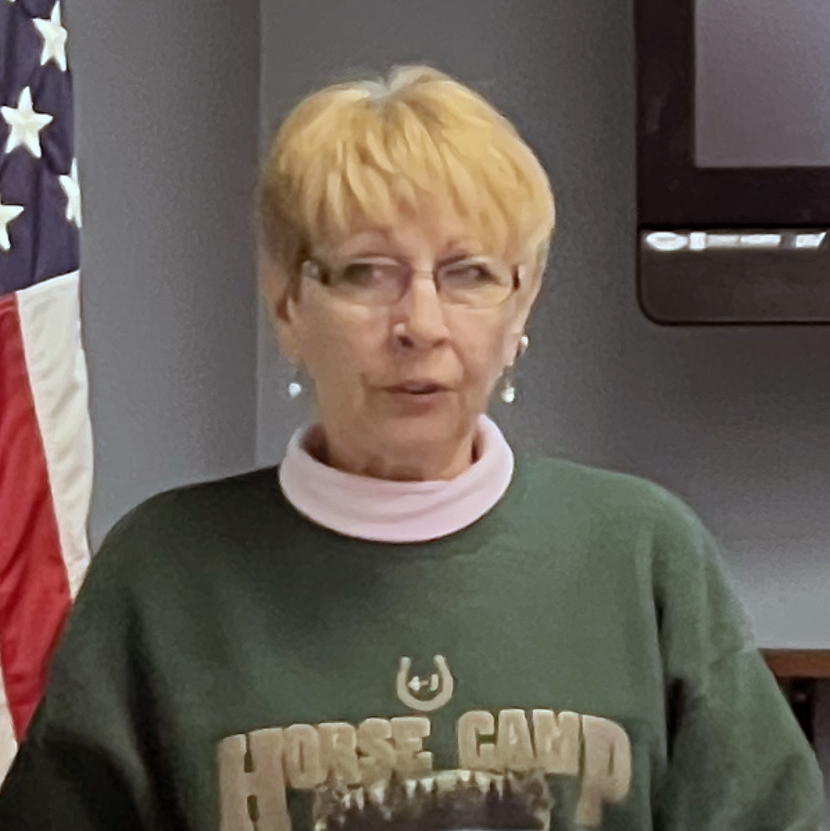 Kay Moore once again spoke to the board about animal control in Macoupin County. Enquirer~Democrat photo by Erin Sanson.

The April Macoupin County Board meeting was held on a rare Wednesday night session at its usual time and location. The meeting was moved due to township meetings that took place on Tues. night instead. Animal control was once again a topic of discussion multiple times throughout the evening.

Julie Boehler was hired as the new Animal Control Administrator. She signed a three-year contract with the county. Boehler is the fourth administrator in a two year period for Macoupin County.

Discussion was held over the creation of a committee for the SAFE-T Act regarding operation and funding issues. State’s Attorney Jordan Garrison explained the changes courts would see with the passage of the SAFE-T act. The biggest changes are the abolition of monetary bonds in most criminal cases and to set bond requires a petition process and further evidential measures. Bond hearings will have to be held 24 hours from the time of arrest, including weekends. Orders of protections would be available at any time, there would be no failure to appear warrant. The 800-page bill introduced many new parameters that Garrison says will increase the number of jury trials held, increase the burden placed on the State’s Attorney’s office, the Circuit Clerk’s office, the Sheriff’s office and expand the workload of many other offices.

It was recently decided at the U.S. Treasury Department that American Rescue Plan (ARPA) funds could be used for a wide array of projects. County Clerk Pete Duncan said the biggest change for the county would be in lost revenue. The standard allowance for lost revenue would allow Macoupin County to declare up to $10 million. The county only received $8.7 million, but could claim all of the $10 million as lost revenue. The money cannot be used to establish reserve funds, resolve debt incurred prior to March 3, 2021, offset changes in taxes levied, make bulk payments to pension funds, or make payments on court directed settlement. The ordinance was approved to declare the standard allowance. Requests from various county departments and officials are being received by Duncan who is communicating the requests to the board. Fund distribution will be finalized at the May meeting.

Kent Tarro was listed on the agenda as a guest. He discussed a grant that Macoupin County Public Health hoped to apply for, if the board approved his resolution to apply. Tarro ceded the rest of his time to Elyse Schoen and Lindsay Minor to discuss with the board the Macoupin and Montgomery Public Health Department’s Safe Passage joint program. Safe Passage offers an accessible way for those struggling with substance use and abuse disorders to seek help or treatment from wherever they are. The program has been established in most of the communities in Macoupin County including Carlinville, Gillespie, Staunton, Brighton, Bunker Hill, and Mt. Olive.

Kay Moore, another guest at the meeting, was present to discuss once more the animal control problems faced by the county. She felt that there should be two control officers in the county, so they can adequately cover the entire county. Moore requested that animal control resources be spent in the field rather than in running a shelter. She felt many of the animals, especially the dogs, were unadoptable as they bark, jump, and may snap or growl at individuals or families looking to adopt a pet. Moore asked that after a certain amount of time, if the animal remains unadopted, they be removed from the shelter so the county did not have to continue to pay for their care.

The board approved a resolution allowing the public health department to apply for a grant requesting 11 buses and 11 vans for the transportation system. Tarro told the board that Public Health was unlikely to get all 11 buses or vans but they may be able to get one or two.

A resolution was discussed that would transfer $10,000 into the animal control budget from the County Administration fund. Of the 18 total board members, only 15 were present. The board members voted 14-1 to pass the resolution. Acord was the only negative vote.

In Bird Township, a bridge over Bear Creek is in need of repair as the wooden supports have rotted. The repair will be approximately $10,000.

In Gillespie Township, new pipes are required to fix a culvert over Adams Branch Creek. The estimated cost of the repair is $36,000.