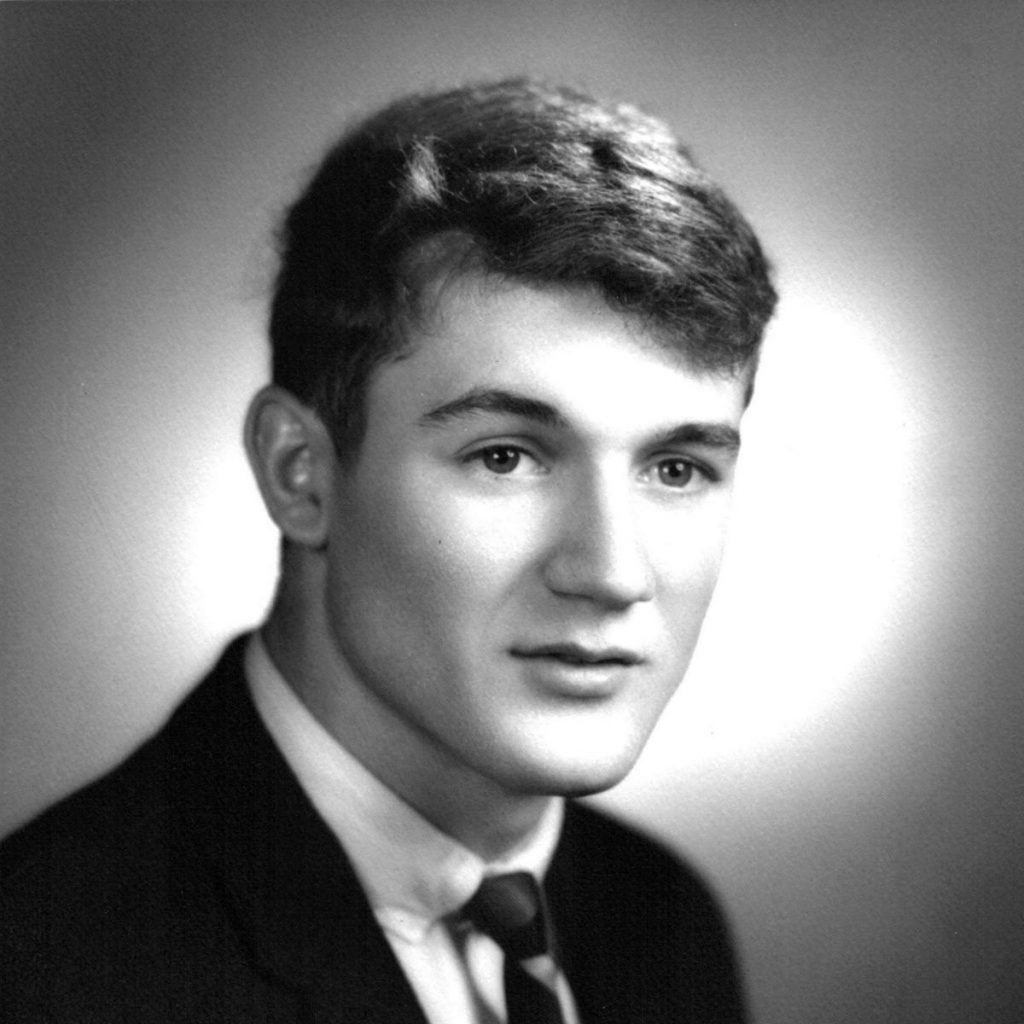 Mike was born May 17, 1949, the youngest child of Victor and Christine Selvo.

As a youngster he was slight with light-colored hair, easy-going and interested. He was a student at Carlinville South School, and like his brother, was a paperboy getting up at 5:20 a.m. and delivering newspapers on his bicycle before school started – hard going in the winter time, but sometimes with help from Dad and the car in deep snow, etc.

When Mike was in Junior High and High school he matured physically and got to be a pretty big guy. He enjoyed athletics and was good. He was a great basketball and football player for the Cavaliers and also an excellent track athlete, setting several records that endured for many years.

At the end of High School Mike faced the same situation many HS athletes face – no more institutional athletics. Mike got busy and worked some labor jobs, until deciding to try College. He went to U of I Champaign and tried out for the basketball team. Unfortunately a broken wrist prevented him from doing his best. After one year at the U of I, he moved back to Carlinville where he attended Blackburn College playing basketball for them until joining the Air Force.

His first assignment was as an electronic technician in an outpost in the small city of Portogruaro, situated a few miles from the Adriatic coast and in between the cities of Venice and Trieste. There he met his wife Rita and married after a few months of “Italian made simple.” They have two children, Francesco and Patrizia. Patrizia is married and has two children, Michael and Emily, who are both close to graduating High School.

The Air Force then assigned Mike to Tinker AFB Oklahoma, where his son Francesco was born soon after.

Not long after that the family got stationed to Rhein Main Air Force Base, Germany. After a few years Mike decided to leave active duty and remained in Germany for nearly 30 years as a civilian electronic technician, working for the Communications Group, Land Mobile Radio, and then Armed Forces Network.

In 2005 he accepted a position with Armed Forces Network in Vicenza, Italy at the Caserma Ederle, a US Army base, enjoying the “perk” of an immense $4 chow hall breakfast for many years. Mike and Rita lived in Grisignano di Zocco, a lovely town situated between the two major cities of Padova and Vicenza.

In 2015 he retired and remained in Grisignano in the house he had bought. Early in retirement he enjoyed daily walks with his dog, trips to the nearby hills and mountains and on occasion driving around the Garda Lake. He also loved swimming and sunbathing on the shores of the Adriatic Sea. He never missed a chance to cheer his grandkids at their various sporting events.

Five years ago he was diagnosed with advanced prostate cancer. He fought the disease with strength and courage to the end. He was aided and assisted by his wife, son and daughter in the comfort of his home. He passed away early in the morning of April 6, 2022, at the age of 72. He will be laid to rest near the Abby where he and Rita wed, at Sesto al Reghena, Province of Pordenone in the Italian region Friuli-Venezia Giulia. May his soul rest in peace.

He is survived by his brother Gerald and his sister Christine. He was Mike, imperfect like many of us, but we loved him dearly and will miss him greatly.

A Facebook group has been created for anyone who wants to leave a message or see some of his old photos. It can be accessed at the website tinyurl.com/MikeSelvo.