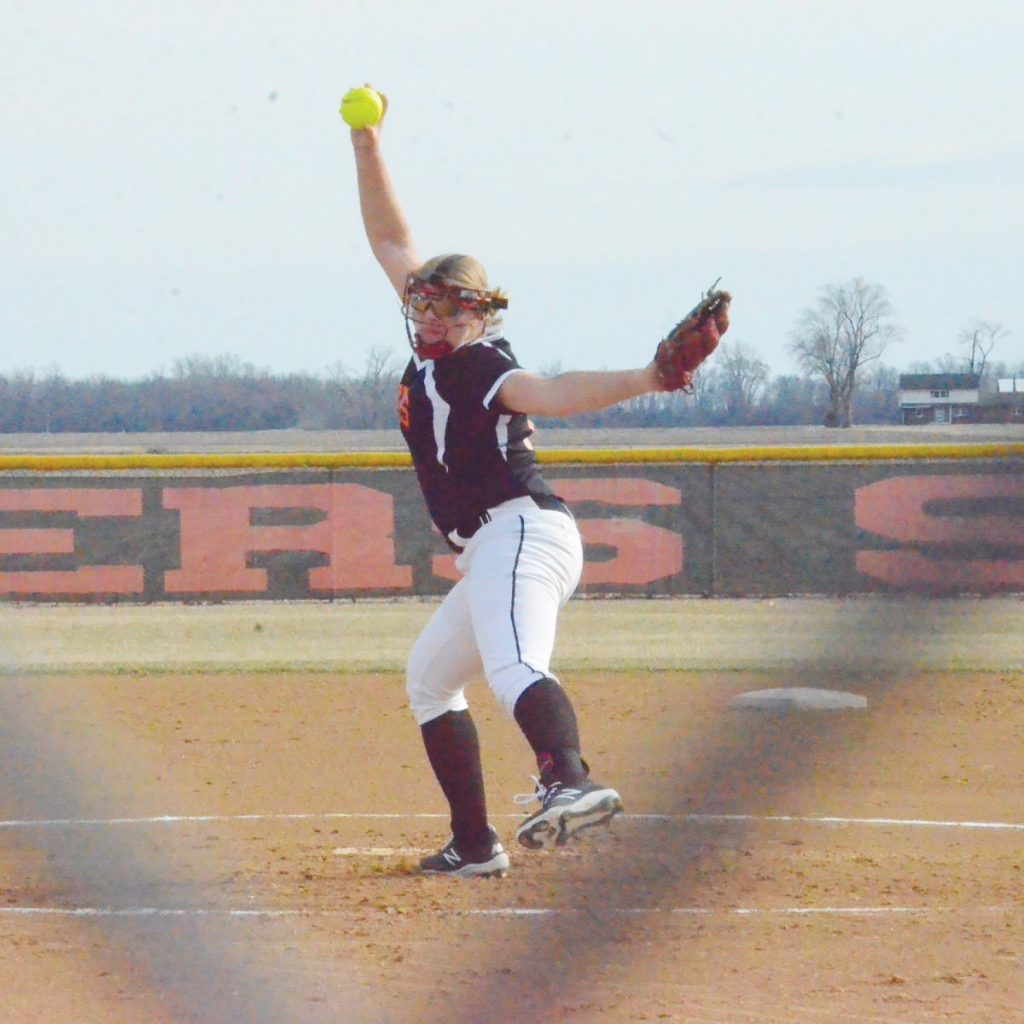 Emma Gipson, pictured pitching for the Gillespie High School softball team against Ramsey Mar. 14, picked up two complete game wins against Arcola and Newton at the Vandalia tournament last weekend. Gipson batted in multiple runs at the plate and compiled a double-digit amount of strikeouts in both games. The Miners finished the tournament 2-1 and are now 8-2 on the season. Enquirer~Democrat photo by Jackson Wilson.

The Carlinville High School softball team extended its winning streak to four games with a dramatic 7-6 victory over Staunton in a ten-inning non-conference classic April 4.

The Cavaliers rallied from a 4-2 deficit to take a 5-4 lead with three runs on RBI hits from Morgan Broaddus and Braley Wiser in the top of the fourth. That advantage would be temporary as the Bulldogs evened the stalemate in the bottom of the seventh on an Evin Frank base hit that forced extras.

After both teams traded a run in the ninth, freshman Isabella Tiburzi blasted a home run, the first of her high school career, over the centerfield fence in the tenth and her classmate Hannah Gibson was finally able to seal an extended complete game win in the pitcher’s circle.

Gillespie was faced with a challenge of playing three games, all in the same day, at a tournament in Vandalia last weekend but lived up to it and earned two wins.

The Miners led 2-0 early in the opener but couldn’t make it stick and took a 9-3 loss against Teutopolis, which rattled off six unanswered runs.

In the next two games, Emma Gipson took over. The sophomore star racked up double-digit strikeouts and went the distance on the mound while putting on multi-RBI performances at the plate against both Arcola and Newton.

Gipson helped Gillespie build up a 4-0 lead with two RBI and struck out 13 Arcola batters to get Gillespie over a tough 5-4 hurdle. Eve Kaduk added three hits, including a pair of triples.

Against Newton, Gipson ripped three of nine Gillespie hits for two RBI while picking up 14 strikeouts, issuing a free pass and surrendering five hits in a 5-3 win.

Gillespie now has an SCC-best eight wins in ten games this year.

Ever since a 21-1 win over 0-5 Bunker Hill in the season opener, Southwestern has been in a losing rut because of a strong schedule.

The Piasa Birds have been outscored 44-15 in the month of April (69-19 since the Bunker Hill win) and have lost five of their first seven games this year.

Southwestern stunned Rock Falls, 5-4, on a walkoff two-run homer by Abby Durbin to earn a split at a three-team Round Robin at Illini Middle School last weekend but couldn’t keep up with Jerseyville in the previous game despite constructing a 7-4 third inning advantage. The Panthers, which had already carved up the Birds 11-1 in Jersey back on March 17, built off of six Piasa miscues and rallied to win again, 14-8.