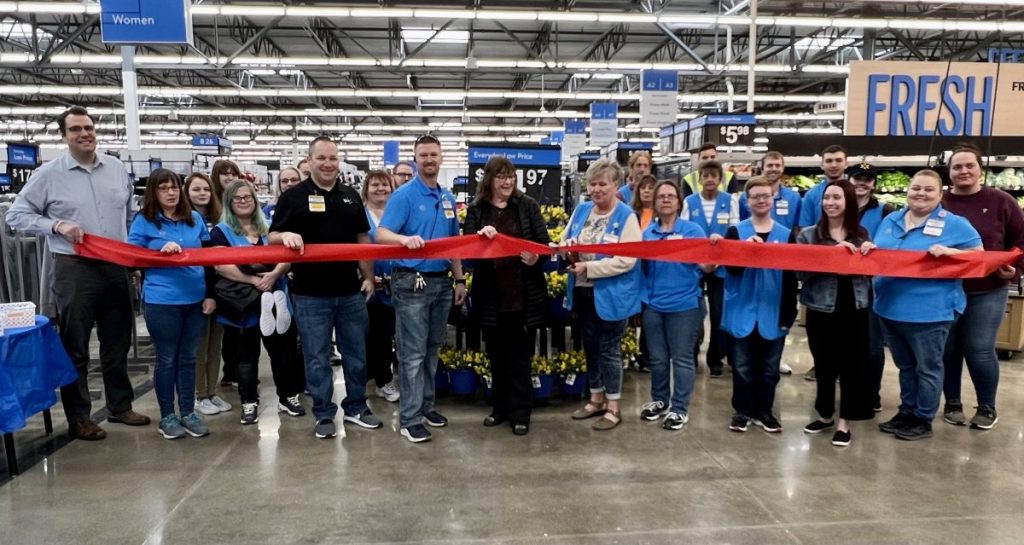 Walmart shoppers were welcomed in to a newly remodeled store on Friday, April 1. The store celebrated its remodel with a grand re-opening event including a ribbon cutting ceremony, donations to local organizations, a food truck, and the seasonal opening of the Garden Center on Sat. April 2. The Garden Center opening included activities such as face painting and a 50-percent-off sale on trees.

The remodel, which began in January, included updates to several departments including produce, electronics, and the liquor department. The upgraded produce department features new lighting and signage. The electronics updates include hands-on displays and the liquor selection has been expanded with additional products.

Perhaps the most noticeable change is on the exterior of the building and the parking lot. Shoppers will now see a second set of doors on the south end of the building, which is home to a new expanded pick-up service.

Store manager Joshua Gideon said of the remodel, “We’ve had some weather delays so we want the public to know the exterior of the store is still a work in progress but the interior is fully remodeled and it looks beautiful. I know our customers will really appreciate the expansion of our Online Grocery Pickup and Delivery option.”

The Carlinville Walmart has also added more lanes of self-checkout and is compatible with a number of different shopping and payment options. Pickup has expanded its capabilities, and Walmart now offers delivery and express delivery from the Carlinville location. It is also possible to pick up prescriptions without leaving the car with Pharmacy Curbside Pickup. There are also options like Walmart Pay, which allows customers to pay their bill via the Walmart app and the Walmart+ membership program.