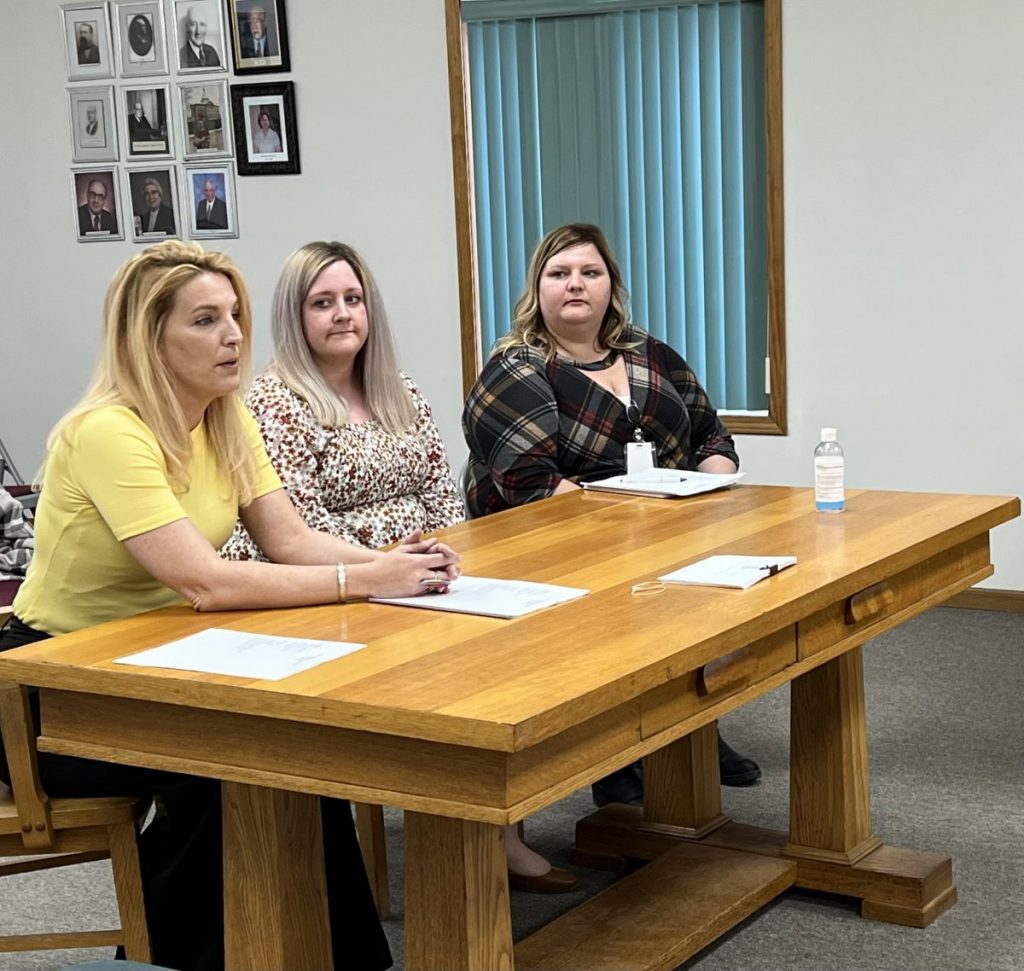 The Carlinville council meeting on Mon., April 4 saw three visitors from a new program, run by the Macoupin and Montgomery County public Health Departments. There was also discussion over the traffic signals around town, the Illinois Alluvial Regional Water Company (IARWC), and events that will be held on and near the Square.

The Carlinville city council meeting was joined by visitors from the Safe Passages program, a joint effort between Macoupin and Montgomery counties to provide help to those struggling with substance abuse issues.

The Carlinville Police Department, Macoupin County Sheriff’s Department, and other locations in Carlinville are already setup as access points for the Safe Passages program. Lindsay Minor, Elyse Schoen, and Jennifer Carron work in the Safe Passage program and came to the council to introduce themselves and their program to the council. Schoen described the program as a judgment free way to help individuals struggling with substance use connect to services to combat their substance use.

Walk-in clinics for the program exist in Gillespie and Litchfield, as well as 23 other access locations throughout Macoupin and Montgomery counties. Besides the police departments, the Macoupin County Public Health Department building is also an access point in Carlinville.

Safe Passage can also provide access to other services offered by the Public Health Department such as medical or dental clinics. Schoen mentioned that Taylorville, which has had a Safe Passage program for several years, has seen their crime rate drop 40 percent due to the end of drug-crime, such as theft and burglary, cycles, which members of the council noted was an impressive decrease.

Safe Passages is also hoping that the North Broad Health Department location can now be used as a central access point for other groups such as Gateway or NAMI (National Alliance on Mental Illness) to offer their services for substance abuse support groups, or support groups of different kinds, such as veterans, family support groups, or LGBTQ+ groups.
Council members were invited to meetings where individuals throughout the communities can come together, inform the health department on gaps they are seeing in their communities, and figure out a way to fill the gaps.

The lights at the intersection of IL-108 and Shipman Blacktop are designated as 100 percent corporate, meaning the state will not pay for any maintenance for those lights and does not contribute to the energy charges for the lights. The lights at Nicholas and Broad and IL-108 and MacCausland are designated as 50 percent State and 5 percent corporate, meaning half of the maintenance responsibility falls to the State as do half of the energy charges.

The lights near Walmart are not on a State highway and are the full responsibility of the City of Carlinville. Thus they were not included in the maintenance agreement.

The Carlinville Zoning Map needed ratification as it recently underwent a change. The only change, according to Zoning Administrator Brian Zilm, was the rezoning of a property on North Oak Street from single family residential to neighborhood commercial. The council voted to ratify the new map.

Updates from Joe Direso regarding the IARWC meeting were discussed. The Central Macoupin Rural Water District was present, with new representation in Rich McClain. According to the IARWC attorney David Foreman and Sue Campbell, after they reviewed previous meeting minutes, it was discovered CMRW never resigned from the IARWC and is still a group board member.

The Fosterburg Water Department voted to accept the water supply agreement and is now a member and board member, bringing the water board to seven voting members. Each municipality financial contribution to the project changes with the addition or loss of members. According to Dan Held, Carlinville’s alternate representative on the IAWRC board, adjustments are still being made to each members contribution.

The 2022 Municipal band schedule was given out during the meeting. There are six concerts scheduled for the summer.

Monday, May 30
Memorial Day Concert held at 7 p.m. at the American Legion Hall.

Friday, July 1
Independence Concert held at 7 p.m. on the Square.