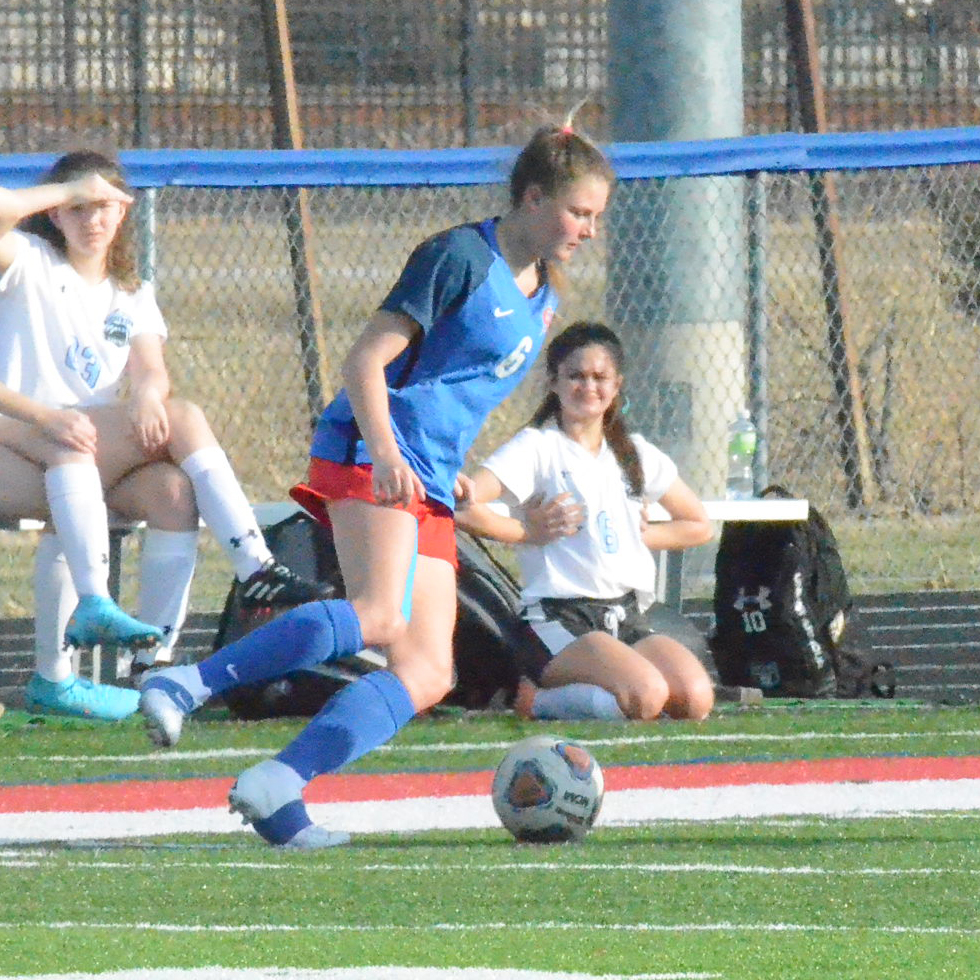 Jordyn Loveless, a freshman, scored a hat trick to lead the Carlinville High School girls’ soccer team to a 6-2 win over Auburn in the third place match of the Route 66 Kickoff Classic Mar. 26. Enquirer~Democrat photo by Jackson Wilson.

Behind a hat trick from freshman Jordyn Loveless, who additionally contributed an assist, the Carlinville High School girls’ soccer team capped off the Route 66 Kickoff Classic with a 6-2 win over Auburn to place third Mar. 26.

The other goals were tallied courtesy of the Whitler duo, with Evee putting two in the back of the net. Marlee scored her goal at about the 21-minute mark of the second half.

Carlinville finished the tournament 2-1 overall, defeating Lincoln 6-0 in the opener Mar. 24 and falling to eventual champion Pleasant Plains 8-0 in the semifinals Mar. 25.

Staunton dropped a first round match against Auburn, 3-1, Mar. 25, but rallied to put its first two wins of the season on the board and earn a fifth place ranking.

The Bulldogs got by North Mac, 2-1, Mar. 25 and conquered Lincoln in a tight showdown that was decided via a 3-2 penalty kick tiebreak Mar. 26.

Lily Bruhn scored a goal for the Bulldogs in regulation.

Gillespie defeated North Mac, 2-0, for its first win of the season in the seventh place match Mar. 26.

Madison Niemeyer and Lilly Brown each scored a goal for GHS.

The Miners snapped a three-game skid and dropped the Panthers to 1-6.

North Mac lost to runner-up Greenville in a 1-0 quarterfinal nailbiter.

Pleasant Plains went the entire tournament without allowing a goal and won each game by a landslide. The Cardinals outscored their

opponents 22-0 and smoked Greenville, 7-0, in the championship.