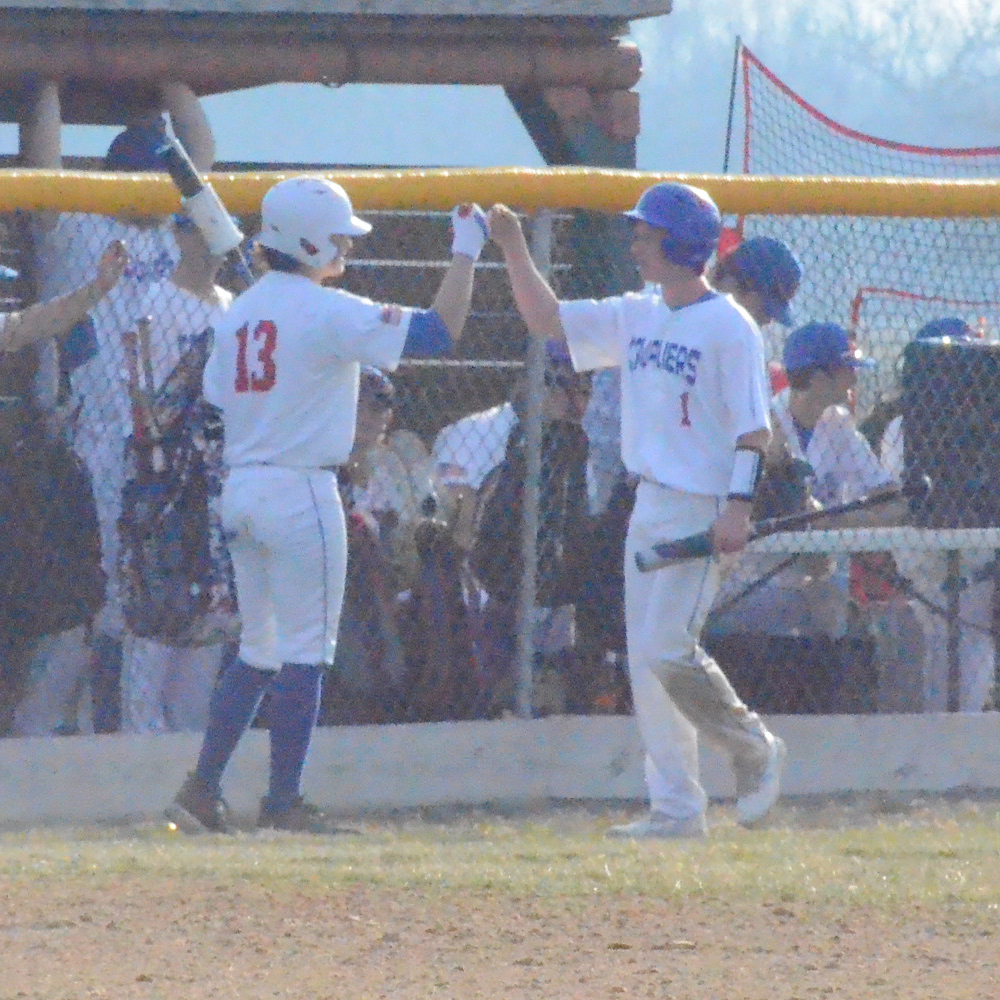 Jake Schwartz (right) fist bumps Kolton Costello (left) after scoring a run for the Carlinville High School baseball team against Calhoun Mar. 17. The Cavaliers are off to a 2-0 start and were one of the area’s hottest teams during the season’s opening slate of games, outscoring Calhoun and Auburn 28-1. Enquirer~Democrat photo by Jackson Wilson.

Southwestern beats Marquette for the first time in a decade

There were a lot of talented high school baseball teams expected to come out of Macoupin County this season. Carlinville, North Mac and Greenfield-Northwestern backed those expectations during the opening week along with Southwestern, which picked up a victory against an old rival for the first time in ten years. Greenfield and Southwestern additionally boosted morale with impressive comebacks on the road.

Carlinville, North Mac and Greenfield off to undefeated starts

North Mac, which made it to the sectional championship last season, already has dominant wins over Greenville (5-1), Southwestern (10-2) and Sangamo rival North Greene (6-1) on its resume.
Greenfield was left for dead in its season opener at Roxana but resurrected the phoenix with eight unanswered runs in the final two innings to nab a wild 9-8 win Mar. 15. The Tigers then took down Pittsfield, 8-3, at home to get to 2-0 the next day.

Southwestern beats Marquette for the first time in a decade, erases five-run deficit to stun Litchfield

Southwestern hit a bump in the road against North Mac during a 10-2 season-opening loss at Virden Mar. 16 and seemed to be headed towards a similar result halfway through the next game at Litchfield 24 hours later.

Then, the Birds’ bats caught fire and generated a burst of momentum.

Trailing 5-0, Southwestern scored in each of the final four innings to win, 9-6.
Four days later, the Birds took to the field for their home opener and picked up a win over Marquette for the first time since 2012.

Southwestern, led by a second consecutive three-hit multi-RBI performance from Hank Bouillon, sent home seven runs in the bottom of the second to erase an early 2-0 deficit and take command.

The Explorers fought and pulled an 8-7 score in the fifth, but the Birds responded and restored separation with four tallies in the bottom half of the frame.

Staunton landed in the win column for the first time this season, beating Bunker Hill 12-0 in five frames Mar. 16.

The Bulldogs scored at least one run in each inning.

Caden Silvester homered twice and did the work from the mound, tossing three-and-two-third innings while surrendering one hit and striking out eight Minutemen.

Gillespie stomped East Alton-Wood River 14-0 Mar. 17, avenging a heartbreaking 7-6 loss to Jerseyville that occurred at home the previous day. Read more about it in this week’s edition of the Coal Country Times.