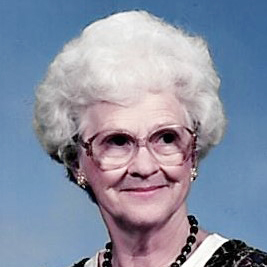 She met her Rocky at a Training Union Class he was teaching.  They married in 1942 while Rocky was in the Army Air Corps during WWII.  Baby Larry was born in 1944 but passed away at birth.

Betty was a member and practicing Christian at Charity Baptist Church of rural Carlinville.  She was blessed with a singing ability which she passed on to two of her daughters.  Betty could not talk over a whisper at the nursing home she lived in but she would sing gospel songs very near her death.  Betty would wake up in the night all her life and write down words to songs God gave her.  She sang for funerals, revivals, and some Sunday mornings.

Betty worked hard all her life.  She and Rocky owned Town and Country Hardware Store and Rocky’s Hardware in Carlinville.  She also worked as a cook at the Carlinville High School.  Betty also was quite a seamstress and made sure her three daughters wore the latest styles, even making all three prom dresses and wedding gowns.

Private graveside services will be held at a later date.

Memorials may be made to Charity Baptist Church.

For online condolence go to davisandersonfuneralhome.com.