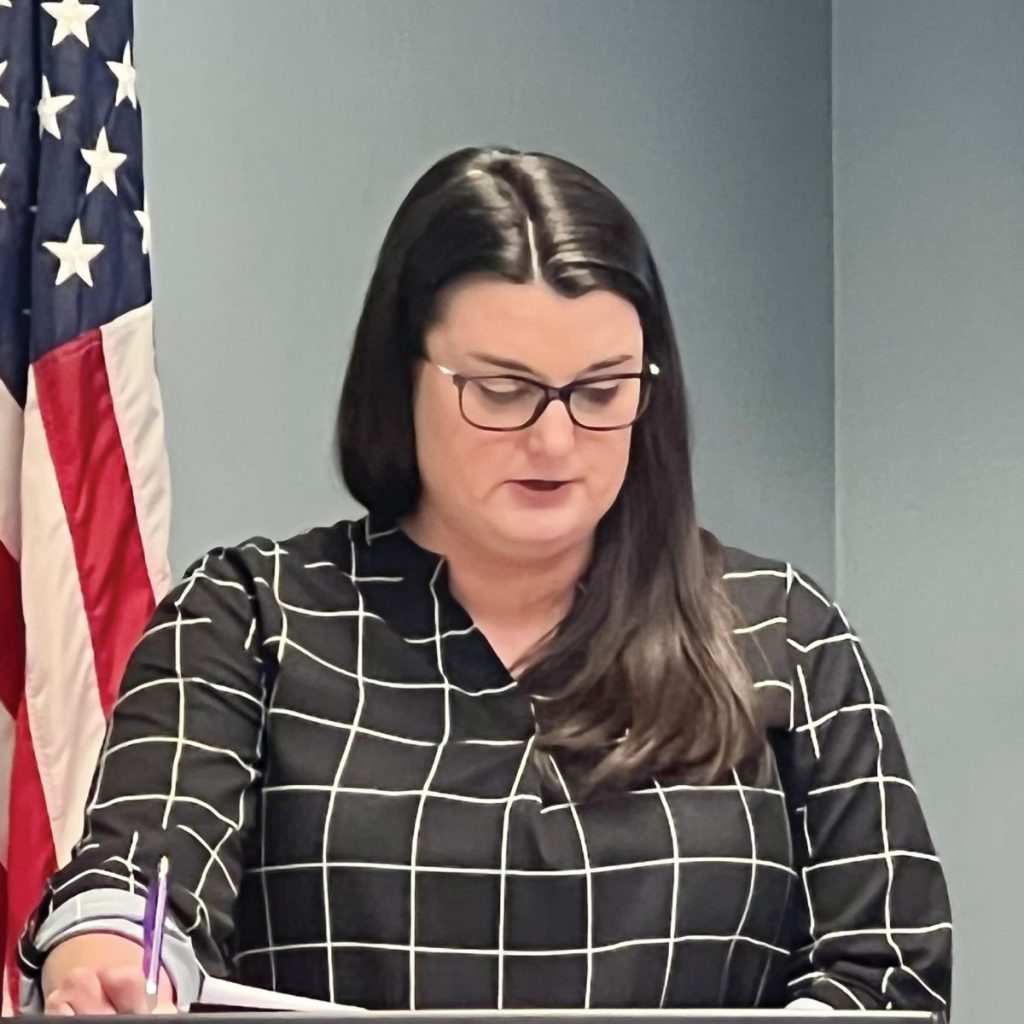 Crystal Bock of Scheffel Boyle in Jerseyville presented the FY 20-21 Audit to Macoupin County Board members at the Mar. 9 meeting. Enquirer~Democrat photo by Erin Sanson.

Crystal Bock of the Scheffel Boyle accounting firm was present at the Tues. Mar. 8 county board meeting to give an audit presentation for the 2020-2021 fiscal year. Bock stated that the county was in good shape overall, though the firm had found a few places where improvements could be made. The first area was account reconciliations, which were not performed in a timely manner causing, for example, reconciliations from August to not be entered until December. It was suggested that the county put a policy in place that states reconciliations must be done by a certain date to mitigate the issue. The board was reminded that the list of authorized signers for checks or finances be kept up to date to insure against any financial issues with past personnel. Another area that could be improved was the tax distribution payments. The county has been behind distributing funds from the 2020 tax levy revenue. The undistributed funds are sitting in a bank, however the funds are under collateralized at the bank by about $18 million. Bock encouraged the board to work with the bank and check the funds at least every month so the county has sufficient collateral should the bank close so as not to lose the county’s money. The last improvement was a suggestion to add a secondary authorizer to approve expenditures and reviewing invoices to the County Clerk’s office. Currently, County Clerk Pete Duncan is the only person who approves funds in that office. It was also recommended that a second signatory be added at the Sheriff’s department.

Bock gave the county a fair rating, which she says is the best rating one can get, which shows an unmodified, clean audit with no major issues. The county received $5 million more than they spent in FY 20-21, but $4.3 million of that was one time COVID-19 money. In total, the general fund revenue was $14.4 million and the total expenses were $9 million, which was up $813,000 from the previous year, mostly due to expenses relating to the courthouse dome project.

As part of the fiscal year 21-22 mid-year budget review, Duncan noted that 61 percent of the budget has been receipted. He pointed out that, like Bock mentioned in the audit, some of the receipts were from the previous fiscal year that were not finished in the same fiscal year. So far, the county has only received $97,000 for housing federal prisoners when last year at this time, with a similar amount of prisoners, the county had received $220,000. Board member David Thomas said that had the sales tax not been up, the county would have been in trouble since the funding for federal prisoners has not come through.

A resolution was passed by the board, pending approval by State’s Attorney Jordan Garrison to vacate Peter Street in Carlinville. Chris Hunter, the attorney representing the individuals who made the request was present at the meeting to answer questions from board members. Hunter says that when the Woodlawn subdivision was platted in 1918, streets were platted on each block but the streets were never developed. Peter Street remains undeveloped and is used only by the two residents who live adjacent to it to access their driveways. They are requesting the county vacate the street and the property owners will take over care and maintenance of the road. There was discussion amongst the board of whether the road was overseen by the county and not the township or city. Hunter says he has spoken to both the city and township who told him he needed to speak to the county board. The board members present had no issue approving the request to vacate the property, but as Garrison was not present to offer a legal opinion at the time the board moved to approve the action only after Garrison had reviewed it.

Sharon Wilson was reappointed to the Virden Cemetery Association Board for a six year term ending Dec. 31, 2028.

Larry Rayburn was appointed to the Emergency 911 Board for an unexpired term ending Feb. 28, 2024.

A request form from the county has been finalized for American Rescue Plan Funds. Duncan is expecting many requests from around the county, especially if the guidelines to what the money can and cannot be spent on are more lenient as the final federal guidelines are expected to be.

Board Member Bernard Kiel told the board that he was working on a contract for veterinary services to come to the Macoupin County Animal Control and Shelter. The board is hoping to contract a service to come to the shelter weekly to look at any animals and keep animals up to date on shots and vaccines. The three vets that usually serve the county, Greenfield Veterinary Services, Macoupin County Veterinary Services and Animal Medical Center in Litchfield have all quoted a $75 an hour price for a contract. No contract has been finalized yet and Kiel will continue to work on the issue.

The monthly County Clerk report had to do with a bill currently in the Illinois legislature. A law was passed in Illinois recently to allow for permanent vote by mail cards. County Clerk’s offices are required to mail out vote by mail applications to everyone in the county both in June 2022 and before the consolidated election in 2023. The bill that is currently in the legislature would allow citizens to send a written request to Duncan’s office to not receive a vote by mail application. Doing so saves the county money on mail and citizens will not have to get unwanted mail. Duncan encouraged the board to reach out to local state senators and representatives to support the bill, SB-3965.

The next County Board meeting will be held on Wed., April 13. The date change is due to township meetings being held on the second Tuesday of April.