A large crowd of teammates, friends and fans congregated on the town square to put on a sendoff for Carlinville High School wrestler Jake Schwartz as he departed to Champaign for the IHSA state meet. Photo contributed.

“I definitely look to get on the podium next year.”

Even though he set a new all-time single season program record for wins this year, Jake Schwartz will still have plenty of unfinished business as the senior captain of the Carlinville High School wrestling team in 2022-23.

Appearing at state for a second time, Schwartz was hoping to improve on a 1-2 performance he had put on to conclude his freshman season. Unfortunately, the same outcome repeated itself and that left Schwartz feeling rather disappointed.

“I had higher expectations this year,” said Schwartz. “When I was a freshman, I just wanted to wrestle but this time I wanted to place and I thought I had the ability to do that.”

Based on what sports’ analysts thought of Schwartz, his outcome wasn’t a shock. Despite going into the big dance with a dominant 45-3 record, the junior still hadn’t been picked to rank amongst the top ten in Class 1A. However, Schwartz managed to shake off the snub even though it was slightly bothersome. As a result, he ended up being a tough competitor against everyone that he wrestled in the 145-pound weight class and showcased why nobody in the bracket was worthy of being favored based on statistics.

Though he fell short in the opener, Schwartz stood his ground against Elmhurst Immaculate Catholic’s Joseph Gliatta before taking a 5-3 major decision loss. 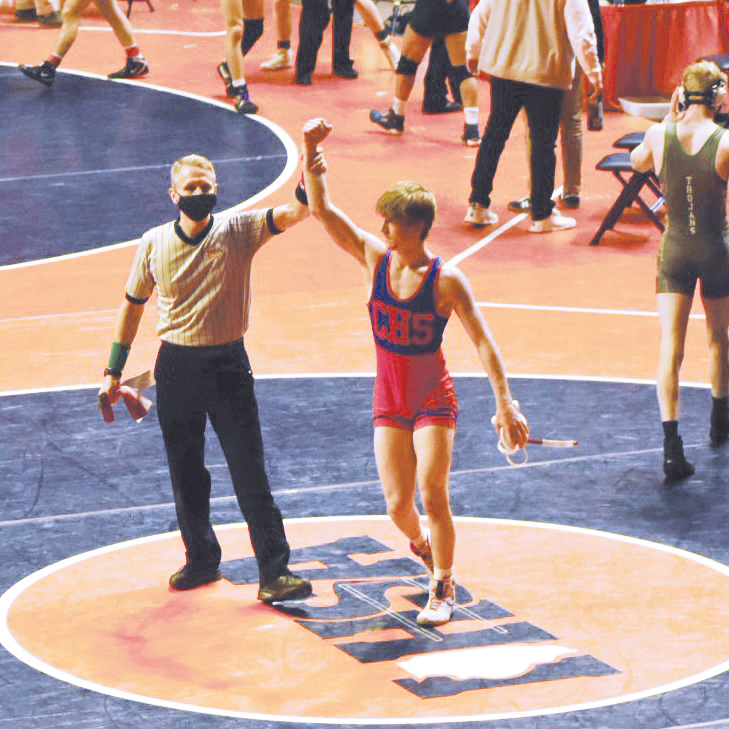 Jake Schwartz returned to the IHSA state wrestling mats for the second time in his career and picked up one win in three matches as the lone representative of Carlinville High School. Schwartz, who missed the entirety of last season rehabbing from a broken wrist, ended a historic junior campaign with 46 wins – a new single season school record. Photo contributed.

Schwartz pinned Dwight’s Emmett Emmons in 3:19 to stave off elimination and was mere moments away from taking the next step and crossing into uncharted territory with an opportunity to become the first CHS medalist since John Wynn (1985). He was in the driver’s seat but couldn’t finish off Dakota’s Tyler Simmer in regulation. As a result, Schwartz ultimately saw a historic season end in overtime heartbreak.

“I let him up a little in the third period because I thought I could beat him right there to win and I ended up not being able to,” Schwartz said. “Then, overtime was obviously ‘go time’ but I just wasn’t able to step up to the challenge. I ended up going for it in the final seconds and did something I probably shouldn’t of done and lost. It is what it is.”

As much of an accomplishment as it was to qualify for state and be able to raise his arm while standing on the IHSA logo, Schwartz said that it still felt like just another win on his schedule because he had already experienced that before.

“If I was able to win in a big match like the blood round or in the quarters to advance to the semifinals, I think it would of felt a little different,” said Schwartz.
Schwartz, who had to miss his entire sophomore season with a broken wrist, gave credit to his resigning head coach Robert Scott for helping him through what ended up being a smooth rehab process.

“He was a good coach,” Schwartz said of Scott. “He got guys conditioned quickly and he brought a good mindset to the wrestling program. I think he helped me in that aspect and he knew a lot about the sport.”

In addition to showing fellow athletes what it takes to be a winner, Schwartz was able to provide an uplifting message to those that were being overwhelmed by their own injury adversity.

“Keep your head down and continue to work hard,” Schwartz said. “You can’t let it overcome you. You can’t just quit. You have to keep at it. It’ll heal eventually and nothing is going to stop you from that but once that happens, you need to come back bigger and stronger than ever.”
Schwartz got to witness the reputation of his legacy firsthand when a large crowd consisting of teammates, friends and fans congregated on the square to send him off to Champaign.

“I thought that was nice,” Schwartz said. “It felt like I was doing something not just for myself but other people because they wanted to see what I was doing for my town as well. It was pretty inspiring.”

Although wrestling has been Schwartz’s passion from a young age, he is a tri-athlete continuing to play football and is preparing for what looks to be a promising baseball campaign.

“We have a really good team this year,” Schwartz said. “I think we can definitely go to sectionals and state as well.”

Of course, Schwartz is also ecstatic for what his last ride potentially has in store.

“Football will be fun like usual and then I definitely look to get on the wrestling podium next year,” said Schwartz.

Schwartz finished with a 46-5 record this season and thus destined himself to become the newest CHS wrestling great on a list of names consisting of Tristan Burns,

Burns was the original single season record holder with 40 wins before Schwartz surpassed him a couple of weeks ago. Michaelis, the only CHS wrestler to make it through a modified COVID-19 campaign, accomplished the milestone of exceeding 100 career victories while Schwartz was sidelined last spring. Wynn, Petri, Reif and Miller were all state medalists for Carlinville back in the late 1970s and or early to mid 1980s.

“It’s a good conversation to be in,” Schwartz said. “I have a lot of respect for those guys. They are all great.”