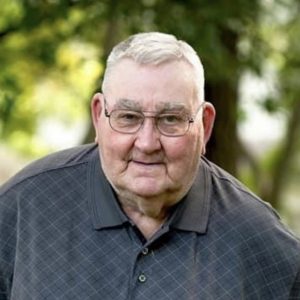 He was born in Macoupin County, on May 31, 1930, one of ten children born to the late Lester and Tossie (Whitlock) Huff.

Gene grew up in Rockbridge, and was drafted into the United States Army in his junior year of High School, serving our country honorable in the Korean War.

Upon his honorable discharge from the Army, he married the former Dolores Jean Shaw on December 24, 1954 in Carrollton.

He began working as a farmhand for Rollin Keele, while residing in Chesterfield. Gene and Dolores then relocated to Palmyra, where Gene worked as a Mill and Seed Mixer for Macoupin Service Company (now Palmyra FS), where he retired in 1995 after 17 ½ years of service.

Gene and Dolores shared in many wonderful memories together throughout their nearly 50 years of marriage, prior to her death on June 18, 2004.

Gene was a true outdoorsman, and enjoyed camping, fishing and tending to his garden.

Surviving are a daughter and son in-law, Gail and Rick Shade of Palmyra; three grandchildren, Bradley and Elizabeth Shade of Tonganoxie, Kansas, Lindsay Hamel of Plant City, Florida and Logan and Haley Shade of Carlinville; two great-grandchildren, Cora Shade and Mason Hamel; a brother, Robert Huff of Jerseyville; and a sister in-law, June Huff of Godfrey.

He was preceded in death by his parents; his wife; a son in infancy, Douglas Eugene Huff; five brothers and their spouses, William and Alma Huff, Harold and Geraldine Huff, Raymond Huff, George Huff and Homer and Margaret Huff; as well as three sisters and their spouses, Mary and Floyd Frost, Hazel Long and Edna and Eugene Allen.
Visitation will be held on Thursday, March 3, 2022 from 11 a.m. until time of funeral services at 1 p.m. at Crawford Funeral Home in Jerseyville.

Burial will follow at Kane Cemetery with full military honors being conducted.

In lieu of flowers or plants, memorials may be given to Wounded Warriors or to St. Jude Children’s Research Hospital.

Memories may be shared with the family by visiting crawfordfunerals.com.