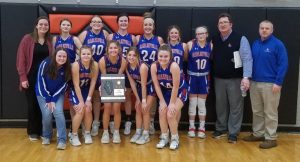 “They were the better team in all aspects.”

Reality finally set in for the Carlinville girls during a 73-42 loss against a state-ranked Quincy Notre Dame squad that was led by a National College Association Division I recruit in the semifinals of the Illinois High School Association Class 2A Waverly basketball sectional Feb. 22.

Abbey Schreacke, who Darrin DeNeve classified as one of the most talented players he had ever coached against throughout his 15-year tenure at CHS, dropped 34 points on 16 made field goals for the victorious Raiders. Quincy Notre Dame went on to win the sectional championship over Alton Marquette a few nights later and ultimately reach the IHSA state tournament.

Throughout their Cinderella run, the Cavaliers had proven time and time again how vicious an underdog can become the longer it manages to stick around. Quincy Notre Dame was aware of this and didn’t waste any time in taking early command. Carlinville wouldn’t give in easily and found a way to outpace the opposition by a slim 18-16 margin in a high-scoring second quarter, but the Raiders already had the Cavaliers in a double-digit hole thanks to a 23-9 run in the opening minutes.

Quincy Notre Dame outscored Carlinville 22-10 in the third and thus did something that Gillespie, Waverly and Hillsboro all had a chance to do down the stretch of regional classics but failed – get the final nail in the Cavaliers’ coffin.

“We handled the press pretty well early, and we hit some shots, and so that kept us in the game for a while,” DeNeve said. “I guess you could say that they slowly pulled away from us. They were the better team that night in all aspects of the game. They played excellent team defense, they ran the floor well, they moved the ball on offense at an elite level and they have an absolutely terrific superstar player. It’s not any more complicated than that.”

The loss brought Carlinville’s final record to 17-15 and ended an era for one of the all-time CHS greats – Jill Stayton. The lone Cavalier senior put up a team-high 14 points and finished her career with over 900. In addition to being second all-time in three-pointers made behind Rachel Olroyd, a former teammate of her’s, Stayton ranked amongst the CHS top ten in steals, rebounds and charges drawn while being one of the toughest and durable players in the business. Out of a possible 102 varsity games, Stayton played in all of them.

“The lesson that the girls can learn the most from Jill is simple: you have to play really, really hard to be successful playing this game,” DeNeve said. “Jill played this season as hard as anyone I can remember. She fought for loose balls, took charges, and made big plays in close games with her hustle. She is certainly one of the best players we’ve had here.”

Having to endure the pain and adversity of surgery aftermath, Lillie Reels was struggling to score consistently throughout the first half of the season. However, once February hit, Reels caught fire and put together a dominant stretch that consisted of multiple double digit performances, including a career-high 18 tallies at Hillsboro and an additional 11 against Quincy Notre Dame in the two biggest games of the season to close out her junior campaign. Already considered a juggernaut that drove a young yet scrappy defense, Reels made an impression on DeNeve that she could take the reigns as a dual threat and fill the massive void created by Stayton’s departure.

“I hope that Lillie can take some confidence and momentum she gained in the last couple of weeks and translate it into a great senior year,” DeNeve said. “She has the ability and form to be a really good shooter, and her ball-handling and defense improved throughout the year as well. We’re hoping for a good summer from her and, hopefully, she’ll be able to hit the ground running next November.”

Each year, DeNeve’s goal has always been to see his team continously improve, regardless of the circumstances. That wish came true once again, especially with how much the underclassmen progressed despite having little to no varsity experience whatsoever.

Isabella Tiburzi, for instance, grabbed over 260 rebounds and scored nearly 250 points (7 in the sectional simifinal), all while leading the team in assists and possessing the lowest turnover ratio as a freshman point forward.

“That is really impressive for a girl her age who was asked the handle the ball as much as she did,” DeNeve said of Tiburzi.

Tiburzi additionally developed a consistent jumpshot, so much so that she earned the privilege of competing at the sectional three-point shootout.

“She has a good form, and so I’m not surprised she became more of a shooter as the season went on,” DeNeve said of Tiburzi. “She has the potential to be a really good player.”

Tiburzi made five threes at the shootout and fell three heaves shy of advancing.

The other young Cavies came a long way as well. Sophomore Karly Tipps plus the freshmen quartet of Hannah Gibson, Jordyn Loveless, Braley Wiser and Addie Ruyle all contributed significant minutes on a nightly basis.

“I’m very proud of the progress we made this year,” DeNeve said. “We all have work to do, but we have a terrific core to build on. We’re looking forward to these girls getting better, mixing in our other freshmen and the incoming eighth graders, having a good summer, and continuing to improve. The future is bright.”