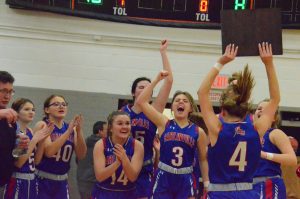 The Carlinville High School girls’ basketball team celebrates with the plaque follwing a 51-49 overtime victory over the Hillsboro Hiltoppers in the championship of the IHSA Class 2A Hillsboro regional Feb. 18. Enquirer~Democrat photo by Jackson Wilson.

Ever since he got the job at Carlinville High School, Darrin DeNeve has been getting the most out of every girls’ basketball team he has coached. Last week, the 2021-22 squad moved itself to the top of that list in terms of success achieved based on overall circumstances when the Cavaliers repeated as regional champions Feb. 18.

Carlinville came into the season with just 10 total players. Jill Stayton, though very valuable as one of the most successful athletes in the history of the program, was the only senior and thus had to embrace a challenging captain role. Lillie Reels, the team’s lone junior, was returning from multiple surgeries. Everyone else wearing the red and blue was an underclassman, including three freshmen that DeNeve had in the starting lineup from day one.

Fast forward three adverse months later and this same core of Cavaliers has a guaranteed winning season while being the only Macoupin County team to have a sectional berth under its belt.

“I’m just so happy for this group of kids,” DeNeve said. “It’s a challenging group but its a good group and for us to make the progress we have made since November is truly something to be proud of.”

“Seeing our team from the summer league, I had doubts myself but this is a completely different team seeing it now,” Stayton said. “We have grown. We continue to grow and I can’t wait to see what these players can become when they are seniors. It’s going to be very exciting.”

After stunning a Waverly South County team that came into the regional semifinal on a nine-game winning streak Feb. 15, Carlinville raised its level of clutch to a whole new level on regional championship gameday. 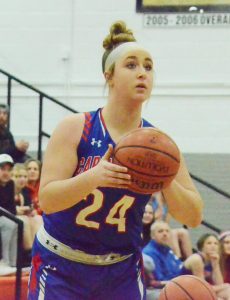 Isabella Tiburzi, pictured shooting during an IHSA regional three-point shootout at Hillsboro High School Feb. 18, was one of the four girls that advanced to the sectional competition. Tiburzi additionally scored 12 points and grabbed 15 rebounds to led Carlinville’s basketball team to a regional championship win over Hillsboro that same night. Enquirer~Democrat photo by Jackson Wilson.

Nobody knew it at the time, but Isabella Tiburzi’s comeback to clinch the final sectional berth in the sudden death round of the three-point contest was actually foreshadowing of what was to come.

Needing to make at least three of five triples on a final rack stationed in the left corner – her least efficient spot, Tiburzi caught fire and connected on four to advance. The freshman power forward also strung together a double-double of 12 points and 14 rebounds in the biggest game of her career one hour later.

Reels, who had been struggling to score consistently for the vast majority of the season, put a career-high 18 points on the board and saved the season for the Cavaliers when she banked in a game-tying double-covered three-pointer at the buzzer that forced overtime against regional host Hillsboro, which had an opportunity to put the game away at the free throw line with eight seconds left but missed the front end of a one-and-one.

Reels’ heave was the definition of an answered prayer, especially since she only had time for one dribble when Tiburzi found her after crossing the halfcourt line with two ticks remaining on the clock.

“I saw the time right when I got the ball and immediately knew I had to throw it up,” said Reels. “I just can’t describe this. I’m so happy for everybody. I couldn’t stop crying when the final buzzer went off. This is so special.”

“She has that memory for the rest of her life,” DeNeve said of Reels. “There’s only so many moments where you get these sorts of opportunities and she made the most of it. This is what makes high school athletics so special.”

As chaotic as the scene was from the officials reviewing whether Reels kept both of her feet behind the line while both fanbases argued opposing cases, to the emotional Cavaliers jumping up and down while cheering, hugging and screaming on the sideline, nothing had been won yet when all of that dust had cleared and everyone settled down. 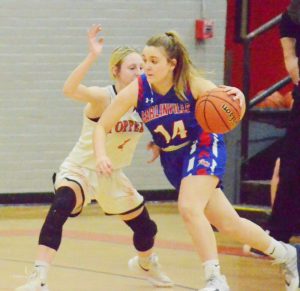 Lillie Reels scored a career-high 18 points and helped lead the Carlinville High School girls’ basketball team to a 51-49 win during an IHSA Class 2A regional championship at Hillsboro Feb. 18. Reels hit a game-tying three at the buzzer to force overtime. Enquirer~Democrat photo by Jackson Wilson.

Hillsboro didn’t waste any time in placing another hurdle in Carlinville’s way.

The Hiltoppers jumped out to a four-point lead in the first extra minute but the cardiac Cavies were once again up for the challenge and ended the game on a 10-2 run to seal a third come-from-behind victory in as many playoff games.

“We knew we had to stay focused,” said Stayton, who scored four of her nine points on four attempts from the charity stripe in overtime. “We still had a lot of game left to play and we had to remind ourselves that we weren’t going to lose. And, we fell through with it.”

The Cavaliers traveled to Waverly Tuesday to play 26-3 Quincy Notre Dame – the third highest ranked team in the Class 2A poll.

Coverage will be featured in next week’s issue.