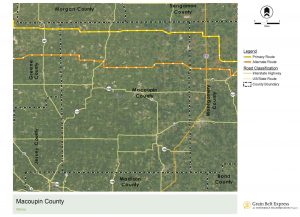 Grain Belt Express is once again attempting to create a multi-state power transmission line spanning from Kansas to Indiana. The company’s first attempt at the project was in 2015 when Grain Belt Express was under the ownership of Clean Line Energy, LLC. As of 2020, Grain Belt Express is owned by Invenergy Transmission, LLC, a deal which had been in the making since 2018. The new company clearly stated online that they have no affiliation with Clean Line Energy.
The project was approved by the Illinois Commerce Commission in 2015, which had approval from Kansas and Indiana as well. Missouri did not approve the project when it was proposed initially.

The proposed routes of today follow similar paths as they did in the initial project. The route would cut through the north part of Macoupin county affecting landowners near Scottville, Modesto and Virden. Should the alternate route be used, the transmission lines would still run through the northern half of Macoupin County, but slightly further south, affecting areas such as Hettick and Standard City.

Grain Belt Express hopes to work deals with land owners, over 130 of them, to come to an agreement about the land. Grain Belt Express has said they will pay landowners 110% of the value of the land on which an easement would be located. The typical easement would be around 150 feet, though some may be as much as 200 feet depending on the terrain and construction requirements. An easement agreement will let owners maintain their rights to the land and the land can still be used for its original purpose, i.e. fields, pastures and hunting ground.

Once an easement agreement is signed the company will pay 20 percent of the total easement value to the landowner, after he initial payment landowners cane decide whether to receive the remaining amount in a lump sum or at annual fixed-rate payments for as long as the easement lasts.

Compensation will also be provided for the structures on the land. Landowners are able to choose between a lump-sum payment of $18,000 per structure or annual rates of $1,500 per structure for the first year with a 2 percent increase each year for as long as the structure remains on the property.

Grain Belt has also committed to paying landowners 300 percent of the annual yield for the land within 50 feet of the structure and will reimburse owners for agricultural impacts, such as crop damage or crop and conservation program revenue impacted by the project. 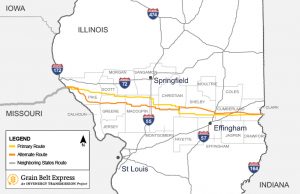 Besides bringing cheap, renewable energy to the area, Grain Belt Express says that by allowing the company to pass through the area billions of dollars will be brought in for the new economic activity. They claim to be capable of providing 2,200 jobs locally for the duration of construction, four million dollars in new tax revenue in the first year and 33 million within the first 20 years.

Local Unions such as Laborer’ Union International Union of North America (LiUNA) Local 338 of Wood River is one of the unions who would be working on this project in the area. Business Manager for LiUNA 338, Greg Stimac, says the union is fully in support of Grain Belt Express saying that, “Macoupin County needs good jobs.” Stimac was also of the opinion that with the influx of workers to the area businesses and restaurants will see an increase in business, allowing communities to grow.

Grain Belt Express is promising affordable, clean energy across a near 800 mile expanse of land. They will use renewable wind energy and promise low costs for their product. They also say that they are more reliable because they will have access to three power markets and can move energy in two directions. The advantage of that being that should a line be down in Missouri, power could come from Indiana to keep the lights on in Illinois.

Despite approval from the laborers who would be building the towers, farmers and landowners have not been so quick to give their approval to the project. In Missouri and Kansas, reports so far say that 65 percent of the land Grain Belt Express is seeking has been given up voluntarily. In September 2021, Grain Belt Express began a suit to take a resistant Missouri farmer to court to gain an easement.

Granting a private company the right to eminent domain is one of the major objections to the Grain belt Express project. Other objections have been raised about the towers being difficult to farm around.

Macoupin County resident Dorothy Selinger has been burned before by private companies seeking easements. Selinger’s property in northwestern Macoupin County is now bisected by a pipeline that was paced in 2016. While the Grain Belt Express lines will not affect her property, Selinger still objects to the company’s project.

About the Express project, Selinger had to say, “This is awful, they shouldn’t be able to claim eminent domain.”

A Grain Belt Express team member explained that they do serious studies of the proposed areas and try to follow established property boundary lines as much as possible.

Grain Belt Express held its first of three meetings on Wednesday, Feb. 16 at the Elks Lodge in Carlinville. Meetings will be held in the same location in March and April. Landowners who will be affected by the transmission lines are encouraged to attend the meeting, where Grain Belt Express staff are on hand to answer questions. There are maps of the proposed routes available that will show exactly where the line would run.

Kansas and Indiana have approved the plans for their states. The state of Missouri had a change of heart from its first dealings with Grain Belt Express. Grain Belt Express received a Certificate of Convenience and Necessity (CCN) in March 2019. The final route was approved in Missouri and the project was found to be in the public interest of the state and its residents.

The Illinois Commerce Commission has not voted to allow the grain belt Express a route through Illinois. At this time, Grain Belt Express says it is seeking landowner and community input through an extensive public meeting process as part of the process the company undertakes will pursuing state regulatory approval from the ICC.

More information can be found online at Grain Belt Express’s website at grainbeltexpress.com. Grain Belt Express will be at the Carlinville Elks Lodge for their second meeting on March 16 from 5 to 7 p.m. A date and time for the April meeting has not yet been announced.