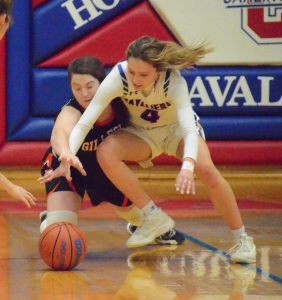 Jill Stayton, pictured battling Gillespie’s Madison Niemeyer for a loose ball, led the charge in helping the Carlinville High School girls’ basketball team erase a double-digit deficit and nab a 42-40 victory over the Miners in the first round of the IHSA Class 2A postseason at the Big House on West Main Feb. 12. Stayton led all scorers with 17 points while holding Niemeyer, Gillespie’s top offensive player, to four points. Enquirer~Democrat photo by Jackson Wilson.

Every match-up between the Carlinville and Gillespie high school girls’ basketball teams was a classic this season, including a highly-intense playoff battle that was won by the Cavaliers at the Big House Feb. 12.

Carlinville rallied back from a ten-point deficit in the fourth quarter and punched its ticket to the semifinal of the Illinois High School Association Class 2A Hillsboro regional with a 42-40 victory.

“High school is all about making memories and these girls made one tonight,” CHS head coach Darrin DeNeve said after the game. “It was a terrific comeback for us and I was excited that these girls got such an opportunity to do that. This team always stays together and they don’t point fingers if something goes wrong. They just continue to play hard and do the best they can while moving on to the next play, which is what we preach.”

The Cavaliers improved to 15-15 overall and finished with a 4-0 record against the Miners, who tap out 8-18. 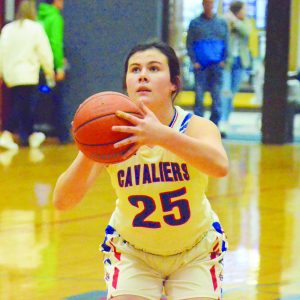 DeNeve made sure to give respect where it was due for Gillespie, knowing that both teams were only losing one senior this year and that there were a ton of stars rising for the future of both programs.

The veteran coach additionally had high praise for the rivalry and the intense battles it provided. Every game had been decided by single digits. The largest final deficit was nine points at the Macoupin County Tournament, but that game needed an overtime to decide it. In a make-up South Central Conference contest at the same venue three days earlier, the Cavaliers barely escaped with a 46-45 triumph.

“The coaching staffs are doing a great job at both the high and lower levels,” DeNeve said of Gillespie. “They have a bright future. They have a lot of good young players a long way down, probably from the fourth grade on up.”

Braley Wiser knocked down a pair of triples for six points and Hannah Gibson added five tallies. Both CHS freshmen also played a role in igniting the fourth quarter rally, each converting a clutch field goal of their own down the stretch.

“The experience this team is getting, especially all of the freshmen, is just phenomenal,” DeNeve said. “Not only are they getting a lot of minutes, but we’ve been in so many tight games this year that their basketball I.Q. is increasing at a pretty fast rate.”

DeNeve, as he had done on multiple occassions throughout the year, praised Stayton’s leadership and the determination of junior Lillie Reels as the main catalysts of this progression. 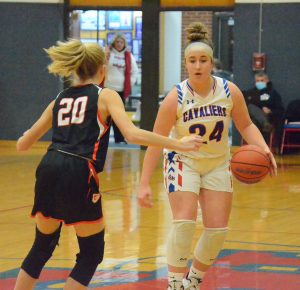 Isabella Tiburzi, pictured isolating Gillespie’s Mia Brawner during an IHSA Class 2A regional quarterfinal at the Big House Feb. 12, scored 13 points and boosted the Cavaliers to a 42-40 comeback win over the Miners. Enquirer~Democrat photo by Jackson Wilson.

“We’ve had some girls that have played really hard over the years and I think Jill is tied at the top of that list,” DeNeve said. “And Lillie continues to fight back even though she’s gone through some injuries. She continues to make plays and it’s been a good experience for her and everybody else as well. It’s been a good season for us.”

Carlinville finished the game on an 18-8 run.

The Cavaliers ended the regular season with a 45-31 loss at Greenville Feb. 10 and finished 4-4 in SCC games.

The Miners, 1-8 in league play, stumbled into the postseason on a four-game skid that was capped off by a 52-20 loss to Staunton in ‘The Pit.’