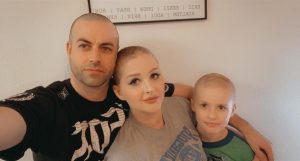 Kenzi Paquin, center, with her husband Eric and one of their children. Photo provided.

Kenzi Paquin, nee Foreman, a former attendee of Virden High School and previous Springfield resident, never thought she would be dealing with Stage 3B cervical cancer at age 31. She is the mother to five children, three boys, and two girls, ranging from age 15 to four-and-a-half.

Paquin was diagnosed with HPV and stage 1A cervical cancer in 2016. She received treatment at the time, and the cancerous cells were removed. Paquin went on to have another child in 2018, which she described as “a difficult pregnancy.” Though it was recommended that she see the gynecologist every six months, Paquin, tired of being in the hospital after a nine week stay with her youngest daughter and sick of doctors, went three years before her next gynecology appointment.

Cervical cancer is known as ‘the silent killer’ as most women don’t realize they have it until the symptoms have progressed. Symptoms for Paquin included cramping, bleeding, which she wrote off as stress. It wasn’t until she had problems with urinary incontinence that Paquin “knew something was wrong” and made an appointment with her doctor.

Her diagnosis of Stage 3B cervical cancer came as a surprise to Paquin, who merely thought her hormones were imbalanced as she had recently undergone tubal ligation surgery, or gotten her tubes tied. After her diagnosis she was sent to get her staging, and was in for another shock when she was found to have such a progressed stage saying, “I did not think that it was going to be stage 3B at all. I thought it was going to be something that I had similar to before.”

Paquin has been documenting her journey with cancer since she found out her diagnosis. At first she said she was documenting her journey for her children but that now she is glad that she did it for herself. “I look back and think ‘Holy cow, if I could do that, then I could do it this time.’ It’s like motivation,” said Paquin.
As part of her treatment, Paquin underwent six weeks of chemotherapy, five surgeries, including two surgeries to remove cancerous lymph nodes, and radiation. Her initial diagnosis came in October of 2020. By April of 2021, her PET scan was clean.

When she went in for her 3 month check-up, Paquin was hit with more hard news. A tumor had been found in her abdomen. The doctors planned more surgeries and chemo to remove the tumor and kill any remaining cancerous cells.

Two weeks later, Paquin was back at the hospital with chest pain, which she believed to be Covid-19. During an X-Ray, doctors found a nodule on her right lung, which was determined to be cancerous as well. Sadly, surgery was not a viable option for Paquin.

She began chemotherapy and radiation treatment once more on Feb. 7, 2022.

Paquin has been advocating for yearly pap-smears since she received her diagnosis.

“Who thinks a pap smear is necessary?” Paquin responded when asked about her advocacy, “None of us want to do it, none of us want to schedule off of work and go and be uncomfortable in that position. No one thinks that it’s important, but if someone had told me or if I would have watched a video of someone going through cervical cancer, then I would have taken the half hour, the hour, out of my time to just go get it done.”

Paquin added that because of her advocacy, thousands of women have watched her videos, and hundreds of women have reached out to her saying that watching her videos had inspired them to schedule appointments with their doctors. Those women and their doctors were able to catch cancerous or pre-cancerous cells in the early stages and remove them.

While doctors might recommend pap-smears every three to five years for some women, Paquin wants all women to get a pap-smear every year.

If insurance does not cover an annual pap smear, Paquin says that Planned Parenthood will do it for free.