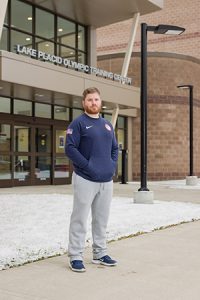 Ambrose Serrano, a native of Carlinville, is currently working as a lead strength and conditioning coach for the United States Olympic and Paralympic Committee in Lake Placid, New York. Photo provided.

Carlinville native Ambrose Serrano is making a huge difference in the lives of American athletes as a lead strength and conditioning coach for the United States Olympic and Paralympic Committee.

Serrano is overseeing training plans for as many as 40 athletes that are competing in bobsledding, skeleton, luge and biathlons at the Winter Olympic Games.

Serrano has assisted in conditioning for over a decade at the Lake Placid Olympic and Paralympic Training Center in New York.

In addition to holding training sessions five to six days a week, Serrano takes pride in staying up to date on field research while engaging with fellow coaches and colleagues to promote sport-science wellness and performance initiatives.

Being from the Midwest, Serrano wasn’t too familiar with winter sports growing up in Carlinville. However, that changed as he followed his dream of working with top athletes on the path to the USOPC.

After graduating from Carlinville High School in the mid-2000s, Serrano attended college at Truman State University and East Tennessee State University. He obtained a bachelor’s degree in exercise physiology plus a master’s degree in sport physiology and performance. Serrano then became an intern at the USOPC prior to landing his current coaching/conditioning title.

Four years ago at around this same time, Serrano experienced something so memorable that he sprinted down a mountain to soak in the excitement.

At the 2018 Olympics in South Korea, Serrano was warming up an athlete for a men’s luge event. Against all odds, that same athlete went on to win silver and became the first American medalist in the history of that event.

In a recent issue of the Truman Review magazine, Serrano described that “coaching was a personal relationship and that there was no greater reward than seeing his athletes achieve the goals they set for themselves,” while reflecting on how much he has come to appreciate what the world of Olympic and Paralympic sports had to offer for athletes and equally, the fans.